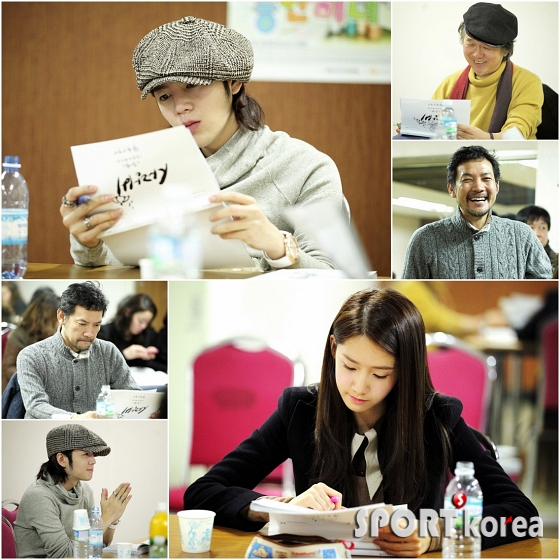 The first script reading was based on the first meeting of Seo Joon (Jang Keun-suk) and Hana (Yoona) in Japan.

Having already shot the portion of the drama set in the 1970's, Jang Keun-suk and Yoona were able to express their characters very differently. Jang changed from the calm and caring Seo In-ha we saw in the 70's to the self-conceited and bad-tempered but freewheeling Seo Joon of 2012 and Yoona shed the timid girl Kim Yoon-hee from the 70s to become the bright and tough Lee Hana.

Jung Jin-young's role of the middle aged Seo In-ha added stability to the drama and increased anticipation for it.

Meanwhile, new KBS drama "Love Rain", which deals with analog love in the 70s and the digital love in the year 2012, will be broadcasted for the first time on the 26th of March.

"Jang Keun-suk and Yoona's first "Love Rain" script reading"
by HanCinema is licensed under a Creative Commons Attribution-Share Alike 3.0 Unported License.
Based on a work from this source