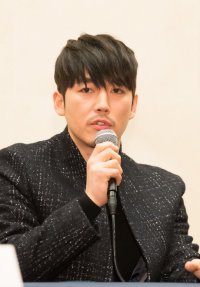 Radel also praised the versatility JANG displayed, including martial arts and dance skills while maintaining a high level of acting during his first English language role. Radel predicted a bright international career for JANG after people all over the world will see him in Dance of the Dragon.

Dance of the Dragon is a co-production between South Korea, Singapore and the U.S., starring JANG, Fann Wong (Singapore), and Jason Scott Lee (U.S.). JANG and Lee's characters are rivals for the love of Fann. The love story mixes ballroom dancing with action.

The world premiere party will take place on May 1 in Singapore. JANG arrived in Singapore prior to the premiere for promotional activities and interviews.

JANG already entered international markets through the success of his Korean films. He starred in the comedy hits "Volcano High" (Hwasango), "Windstruck" (Nae Yojachingooreul Sogaehamnida), and "Please Teach Me English".

"JANG Hyeok enters the world stage impressively"
by HanCinema is licensed under a Creative Commons Attribution-Share Alike 3.0 Unported License.
Based on a work from this source