Jang Hyuk does acrobatics on his own without a stunt crew 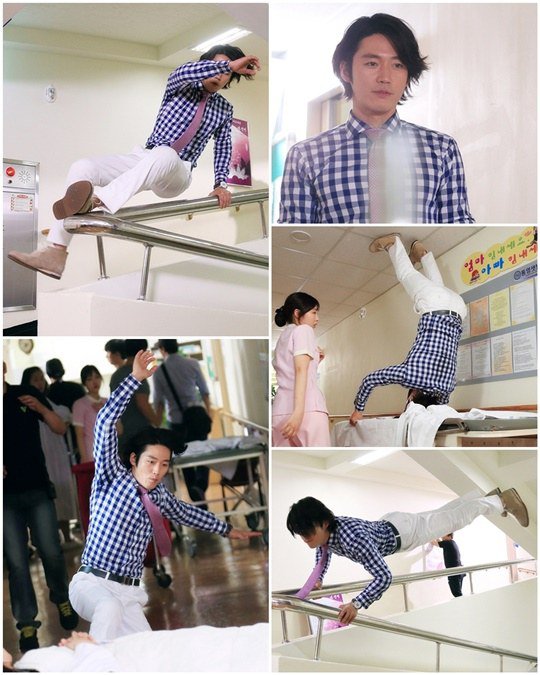 Stills of Jang Hyuk from the new MBC drama "Fated to Love You" were released.

Jang Hyuk takes on the role of Lee Gun, the ninth-generation and only son of the Jeonju Lee family. He has everything from looks, wealth to having a girlfriend, but he doesn't want to get married in a family that anticipates the next grandson. He spends a night with Kim Mi-yeong (Jang Na-ra), a law firm employee who gets impregnated by him.

Stills of Jang Hyuk show him jumping over stairs and cots. They don't seem problematic for him one bit as he rolls and even pretends to trip over them to display a more comical situation.

This scene was taken in a gynecologist's in Tongyeong at the end of May. He didn't use a stunt crew in the steaming hot weather and completed all of the action scenes on his own. All the staff members were awed by the way he handled his action moves.

The crew says, "Jang Hyuk's preparation is peerless. The jumping over stairs, rolling on the bed and other details were all his ideas. He analyzes his character 120% for every scene and he has so much passion".

Meanwhile, "Fated to Love You" is the story of Lee Gun who impregnates a woman after spending an unexpected night with her. To be broadcasted in July after "A New Leaf".

"Jang Hyuk does acrobatics on his own without a stunt crew"
by HanCinema is licensed under a Creative Commons Attribution-Share Alike 3.0 Unported License.
Based on a work from this source