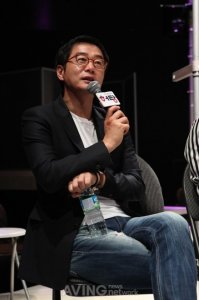 Jang Jin, the versatile film director and creator of the mega-hit "Welcome to Dongmakgol", is making a U-turn to Daehangno with his new theater -- not movie -- production. Calling it "an effort to attract more audiences to theaters", Jang is now staging "Seotun Saramdeul" (Clumsy People) at the Dongsoong Art Center in the heart of Daehangno, the country's cultural mecca. The play runs through March 2.

Jang started as a playwright, and became a leading drama director. He is a talented storyteller who knows how to make dramas which are commercially successful, humorous, and emotionally affecting.

For those who love his films, "Clumsy People" offers the chance to see the early work of Jang -- now one of the most celebrated filmmakers in Korea. "Clumsy People" is the very first theater script he wrote, at the tender age of 23.

Another tempting reason to visit the theater is that the play features A-list movie actors who have worked with Jang before such as Kang Sung-jin, Ryu Seung-ryong, Jang Young-nam and Kim Won-hae.

The drama also stars Han Chae-young, known as a Barbie doll in Korea who surprised the public with her much-talked-of wedding in June. She is trying to reveal her deeper self, her acting talent, at this small Daehangno theater.

The drama tells the story of Yoo Hwa-i, a lovable middle school teacher, and Jang Duk-bae, a hapless thief who happens to rob Yoo's apartment one winter night. Even though he succeeds in getting into Yoo's house, he soon gets into trouble after tying Yoo's hands with the rope he had practiced with at home. This inexperienced and somewhat stupid figure tries to scare her, but ends up spinning gossip with her.

The character of Yoo Hwa-i, a talkative young woman, makes the audience laugh with nearly every word and gesture she makes. She feels sympathy for the robber because he finds almost nothing worth stealing from her home -- except for the recordings of the legendary Bee Gees.

Yoo impresses the fool by offering him some money which she had reserved in case of emergency, and apologizing because there is not much to take.

The two gradually get close to each other, but at the moment when they are about to get cozy, Yoo's father opens the door.

There, the robber-victim relationship suddenly becomes a scenario of boyfriend-staying-overnight-at-his-girlfriend's- house.

Of course, the robber can boogie from the apartment but, here, the audience experiences Jang's specialty of creating surprises.

As with Jang's other comedy films, "Clumsy People" relies on the absurdity of an ironic and seemingly irreversible situation. He creates a tricky situation by having a group of policemen and firemen dispatched to save a man who happens to live in the same apartment, and who is about to kill himself.

One last tip before you click the reservation button on the internet: director Jang has a discussion session with the audience every Wednesday night after the show. Tickets are 25,000 won and 35,000 won. For more information and to make ticket reservations, call 1544-1555, or visit Open the link

"Jang Jin's robbery-romance farce takes the Daehangno stage"
by HanCinema is licensed under a Creative Commons Attribution-Share Alike 3.0 Unported License.
Based on a work from this source