Jang Keun-suk: 'I Want to be Character Actor Who Can Perform Wonderfully' 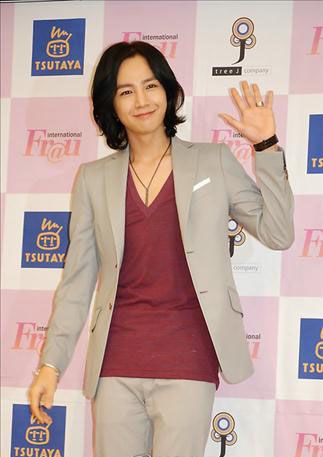 Actor Jang Keun-suk had a fan meeting in Japan from May 29 to May 30 after he finished having fan meetings in Taiwan, Beijing, and Singapore.

Jang Keun-suk held performances entitled "Jang Keun-suk Asia Tour" for two consecutive days at U-Port Hall in Tokyo on May 29 and at Universal Studio Japan (USJ) in Osaka on May 30. During the performances, he showcased his various charms including singing and talking to his fans. In particular, he also had a press conference when he performed in Tokyo.
Jang said about his recent drama in the press conference, "Through the drama "You're Beautiful", I could show my natural looks as best as I could. I think that I could develop myself by expressing myself in the drama. Also, when I played Hwang Tae Kyung, a leader of the band 'A.N.JELL', I could develop more driving forces".

He also introduced his next movie "You Pet". The movie is based on a Japanese cartoon and he will play a rising classic ballet dancer, but he wants to be a musical actor and choreographer. He said, "I had to go on a diet for the movie and the most difficult part was that I could not eat my favorite food, Kimchi stew. For the role, I practice dance eagerly from Monday through Friday. In the future, I want to be a character actor who can express various human emotions of sufferings and sadness from deep inside the heart".

As the setting of the movie involves living together with a girlfriend older than him, he was asked about his thoughts on living together, especially with an older woman. He said, "If I can live with someone I love based upon a premise to get married, it will be like going on a trip every day. I want to be a husband or a boyfriend who can prepare breakfast for her".