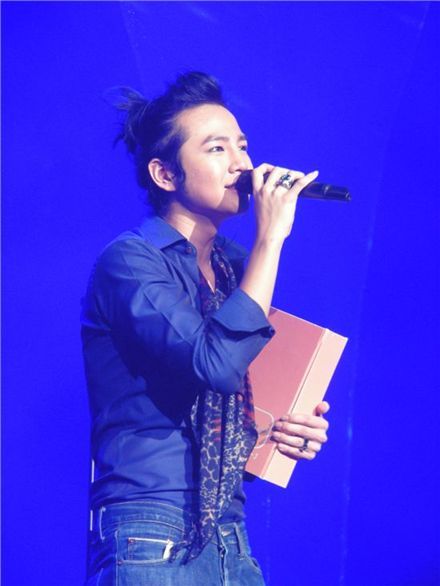 Korean actor Jang Keun-suk kicked off his first-ever overseas fan meeting over the weekend, attracting some 2,500 fans to the Taiwanese city of Taipei, according to his agency Y-TREE Media on Tuesday.

Fans from Taiwan, Korea and Japan turned up to see the 22-year-old star at the sold-out '2010 JangKeunSuk Asia tour in Taipei' held Sunday at the National Dr. Sun Yat-sen Memorial Hall.

"I didn't know there would so many fans. I am thankful that they made me feel comfortable here and I will cherish these memories", Jang was quoted as saying.

The actor prepared a special performance for his fans, singing songs from the soundtracks of the dramas he has starred in such as "Beethoven Virus" and "You're Beautiful". He also handed out mini pamphlets introducing Seoul and played games with chosen fans.

Jang is set to continue his tour into several other countries in Asia including China, Hong Kong and Singapore until May.

Jang, who made his debut at the early age of five, made a number of noted appearances starting with MBC sitcom "Nonstop 4" and gained wider recognition through several dramas. He has also made several big screen appearances -- most recently "The Case of Itaewon Homicide".

He then gained popularity throughout Asia last year after starring in "You're Beautiful" alongside actress Park Shin-hye and actors singer-actors Lee Hong-ki and Jung Yong-hwa.

"Jang Keun-suk attracts thousands to Taiwan fan meeting"
by HanCinema is licensed under a Creative Commons Attribution-Share Alike 3.0 Unported License.
Based on a work from this source