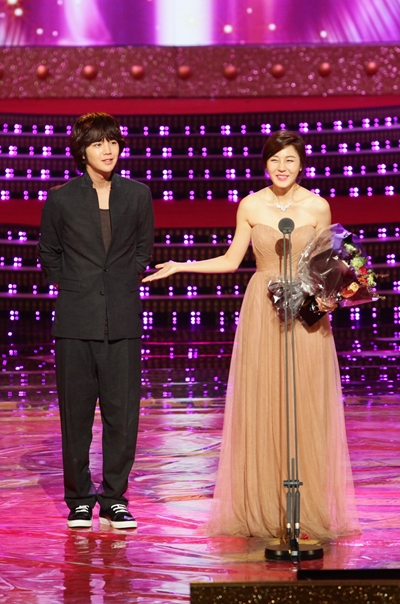 Jang Keun-suk congratulated Kim Ha-neul on stage for the first Best Actress Award she ever received.

She won this award at the 48th Daejong Award Film Festival for her movie "Blind". This is her first big award since her debut in 1998 with the movie "Bye June".

Jang Keun-suk's appearance was a surprise for everybody. Getting up on stage to hand her some flowers, when MC Lee Deok-hwa asked him what he was doing here, he answered, "I ran over as soon as school finished". The two co-acted in "You Pet".

Kim Ha-neul cried her eyes out at the awards and said, "I thought acting was very hard and thought about quitting but I thgouth over time, it was something I could look for myself in and love myself".

"Jang Keun-suk congratulates Best Actress Kim Ha-neul"
by HanCinema is licensed under a Creative Commons Attribution-Share Alike 3.0 Unported License.
Based on a work from this source