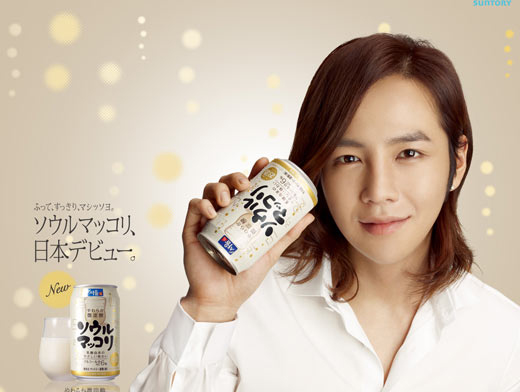 Keeping himself plenty busy, actor Jang Keun-suk has recently signed on to be the official spokesman for the Korean rice wine, Makkoli in Japan. Breaking into the role, the actor has already released his very own commercial in Japan courtesy of Suntory. In the commercial, Jang uses his fluent Japanese in order to teach a young female bar patron on how to ìdeliciously drink makgeolli. I'll admit right now that I've never heard of this wine before but after seeing this commercial and learning how to deliciously drink it from a pro, I've never wanted a glass of rice wine more than I do right now.

As mentioned though, Jang has been keeping himself plenty busy lately. While his debut as the latest Korean idol to release a single in Japan has been pushed off, he will still be doing an upcoming Asian tour and star in a new movie with Kim Ha-neul titled 'You Pet', written by Japanese writer Yayoi Ogawa.

This post was created in collaboration with our friends at Ani.me

"Jang Keun-suk Releases Makkoli Wine Commercial"
by HanCinema is licensed under a Creative Commons Attribution-Share Alike 3.0 Unported License.
Based on a work from this source