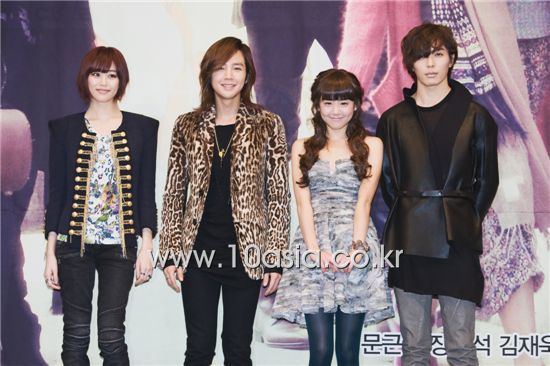 In upcoming TV series "Marry Me, Mary!", Jang Keun-suk may be reprising his role from his last drama "You're Beautiful" where he played the vocalist of a rock band but the actor says the two shows and his characters are anything but similar.

Jang made the remark at a press conference for his new drama held in Seoul on Wednesday, saying that the two shows are completely different; the former based on marriage for people in their 20s and the latter a music drama which shows the process of how an idol band grows.

In "Marry Me, Mary!", main female character Mary played by Moon Geun-young, makes realizations about love and herself while being in two fake marriages for 100 days to completely different men -- Mugyul played by Jang and Jungin by model-actor Kim Jae-wook.

"You're Beautiful" was about a girl who pretends to be a man to join popular idol group A.N.JELL which is headed by Jang's character Tae-kyung.

Jang stressed that the two have no similarities either and are "rather likely to be from different worlds, from opposite sides of the globe".

"Tae-kyung is unlikely to exist in real life, being cartoon-like from his form of speech to his actions and he doesn't open himself up to anyone", Jang explained of the character who was a perfectionist and so much of a nut about cleanliness that he would not let anyone close to him physically, let alone his heart.

"But Mugyul is like a street cat. He'll sleep anywhere, even outside if he gets drunk, and he's free-spirited", the actor said of his "Marry Me, Mary!" character who he described as the type to 'go for anything'. "He'll also easily date around but a month per girl would be his maximum. He won't actually fall in love with anyone because he has been hurt".

Jang then confessed he fell for the drama as soon as he laid eyes on the script in April and had to plead producers not to hand the script to anyone else.

The 20-part show is based on a comic of the same name by Won Soo-yeon, the original cartoonist for 2004 smash-hit drama "Full House" which starred Asian superstar Rain and actress Song Hye-kyo.

The actor was also all praises for his co-star Moon Geun-young, whom he said he was honored to work with and "clicked" with as soon as he saw her. The two are both 23 and have led similar career paths, debuting as child actors more than ten years ago.

"I yelled 'hooray' the moment I found out Moon was cast for the show. I was sure we'd be able to learn a lot from each other and make something that is more of our own, something I usually didn't get to do since I'm usually the youngest one on set, and I also felt that she'd be someone I could really talk to", Jang remarked excitedly.

He then said, "The funny thing is, I had thought up so many things to say to her for the first time we met but we actually felt awkward until we started drinking and finally both blurted to each other 'I really wanted to work with you'."

Moon agreed. "Of course I was mesmerized with the role I'd be playing but the fact that I knew Jang was cast in the show played a big part in my decision".

"Marry Me, Mary!", targeted at viewers not just in Korea but around Asia, has been pre-sold to China and Taiwan at record high prices ahead of going on air November 8.

Jang however, did not see any particular significance in the drama as a Hallyu, or Korean Wave content. "It would be great for the show to become known throughout Asia but what's more crucial is that it shows our culture the way it is in an honest yet fun way".

"Jang Keun-suk says "You're Beautiful", "Marry me, Mary!" completely different"
by HanCinema is licensed under a Creative Commons Attribution-Share Alike 3.0 Unported License.
Based on a work from this source