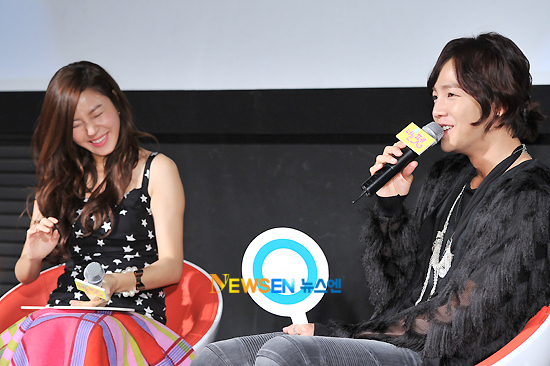 Jang Keun-suk revealed that the kiss scene, which was kind of weak at first, managed to turn out great thanks to Kim Ha-neul's lead.

At the press release for the movie "You Pet" on October 5th in Seoul, he said, "There is a kiss scene with Kim Ha-neul at the end but that ended up to be one of the most profound kiss scenes I have ever done in my 25-year-old acting life".

Then Kim Ha-neul said, "I suggested we do so since I thought we needed something of a certain level. Jang Keun-suk then said, "I was quite weak in kiss scenes but Kim Ha-neul did that to satisfy her needs and desires".

"You Pet" is based on a Japanese writer's original story. Ji-eun (Kim Ha-neul), who has looks and social talent but doesn't have skills with people, meets In-ho (Jang Keun-suk) who has been popular since a very young age, as owner and pet.

"Jang Keun-suk, "Thanks to Kim Ha-neul's greed and desire...""
by HanCinema is licensed under a Creative Commons Attribution-Share Alike 3.0 Unported License.
Based on a work from this source