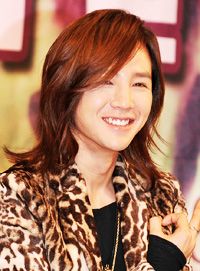 Actor-singer Jang Keun-suk made a record debut on Japan's Oricon Chart, ranking No. 1 during the first week of his single's release. It is the first time a non-Japanese artist has topped the comprehensive music chart in an opening week.

According to Oricon, Jang's single "Let Me Cry", which was released on April 27, has sold 119,000 copies during its first week of sales. The last time a male solo artist debuted at No. 1 on the Oricon chart was over 30 years ago, by Mashihiko Gondo, in December 1980. No foreign artist, neither a solo singer nor a band, has ever achieved such sales, the chart's newsletter said Tuesday.

The best previous record among non-Japanese artists is when another Korean signer, Ryu Si-won, made a No. 2 debut with his first Japanese single "Sakura", in April 2005.

The last time Korean singers topped the singles chart was in October 2008, when TVXQ's "Mirotic" and Lee Byung-hun's debut recording "Itsuka" ranked No. 1 and No. 2, respectively.

Jang is currently appearing as a model for Korean advertisements in Japan, including a "makgeolli" (rice wine) brand and a line of cosmetics. His popular TV drama, "Marry Me, Mary!" co-starring Moon Geun-young, is due to air on TBS in Japan beginning May 20.

"Jang makes record debut on Oricon chart"
by HanCinema is licensed under a Creative Commons Attribution-Share Alike 3.0 Unported License.
Based on a work from this source