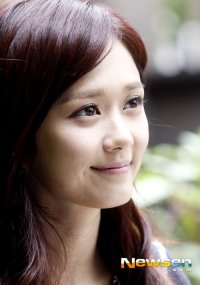 "I only had several acting roles in the early days of my career but my onscreen image became so fixed I was perplexed. But now, I'm not. I don't choose drama roles for the sake of changing my image. More important is the quality of the script and whether I am able to do it".

Jang Nara (28) returns to the big screen in the film "Sky and Sea", her first movie role since her last 2003 film "Oh! Happy Day". In a press conference at an Apgujeong club Thursday, she was responding to a question on whether she was wary of an image transformation.

Jang shot to stardom upon her debut with her cute and jovial image. She is now 29 in Korean age but still maintains the same adorable look. She plays a pure-hearted 23 year old in the new movie "Sky and Sea".

"I turn 30 next year. I needed makeup to look younger in the film. Looking at my made-up appearance in the mirror was embarrassing (laugh). I think staying young at heart is most important. Staying away from excessive dieting is also a key to looking young".

"Sky and Sea" is the story of friendship and love between Haneul (Jang), a homebody since losing her parents in a car accident, Bada (Hyun Jyu-ni) who is kicked out of her home by her stepmom and orphan and pizza deliverer Jingu (Yoo Ah-in).

Jang has been working in China for a long time now. About her new Korean film, she said, "I'm happy and I will give it my best".

She continued, "I worried about my lack of acting experience. It's been a long time since I did a film. I'm more nervous than my debut days. I had difficult times over the years because some projects didn't bear fruit. But I'm comforted by the fact that many are struggling these days and it's not only me".

About marriage, she said, "I feel sad when my mom tells me to get married. I want to live with her longer".

Singer-turned-actress Hyun Jyu-ni, who attracted the spotlight for her role in the recent hit music drama "Beethoven Virus", has finished filming director Kim Yong-hwa's film "Take Off". She says she is under pressure because of her starring role in "Sky and Sea".

She said, "My biggest worry is that another rebellious image, just as in 'Beethoven', will become attached to me. I will try to portray the role as uniquely mine".

Hyun Jyu-ni plays Bada, a rock band vocalist. She said, "There are not many singing scenes, but they will take up a big portion. It's identical to my real life situation of pursuing both singing and acting".

"Sky and Sea" is directed by Oh Dal-gyoon, who also made "Heart is..... The filming, taking place from Febuary to April, cost W1.5 billion. It will hit theaters later this year.