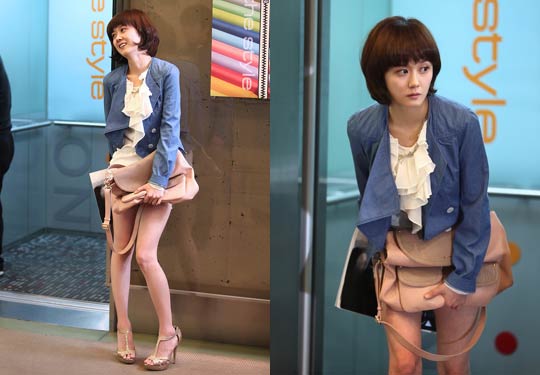 In the new KBS 2 drama "Babyfaced Beauty" (written by Oh Seon-hyeong, directed by Lee Jin-seo), Jang Nara is the lead female character So-young. She was on her way to an interview for a job, disguising herself as her sister after being fired from her job for her age, and ended up in the trunk panty fashion.

In the drama, So-young wears her sister's clothes which are way bigger than her size and leaves the house. In an elevator full of people, she gets pushed and the hem of her skirt gets caught in a food cart, ripping it off her.

She is then unsure of what to do in an elevator full of people, and then skirt out of her hands. She is to be meeting her boss Ryu Jin for the first time in her trunk fashion.

"Babyfaced Beauty" is a romantic comedy about an unmarried woman of age 34 who looks extremely young, with the education background at pause in high school and with the handicap of being a credit delinquent. The cast includes, Jang Nara, Choi Daniel, Ryu Jin, Kim Min-seo, Hyun Young, Oh Yeon-seo, Yoo Yun-ji, Hong Rok-gi and more. Also middle aged casts like Kim Hye-ok, Na Young-hee, Kim Kyu-chul and more will add to the strength of the drama.

To be first broadcast on the 2nd of May after "Detectives in Trouble".

"Jang Nara 'trunk fashion'"
by HanCinema is licensed under a Creative Commons Attribution-Share Alike 3.0 Unported License.
Based on a work from this source