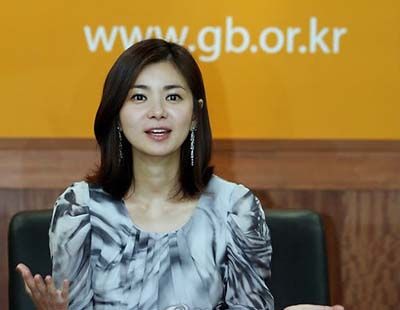 Actress Jang Seo-hee has been named as honorary PR ambassador for the 2009 Gwangju Design Biennale (Open the link). She received her appointment certificate on August 12 at the Gwangju Biennale Conference Room in Gwangju. In the photo she speaks to a group of journalists.

Actress Jang Seo-hee, who has been named PR ambassador for the 2009 Gwangju Design Biennale, pledged on August 12 to do her best to publicize the event in Korea and abroad. Receiving her appointment certificate at the conference room of the Gwangju Biennale Foundation, Jang said, "I already knew a lot about the Gwangju Design Biennale but I didn't have a chance to participate so far. I willingly accepted the offer to act as PR ambassador".

Jang is a Korean Wave star who is very popular in Taiwan, China and Mongolia. Her popularity has soared recently for her role in the SBS series "Cruel Temptation", which has been exported to 10 countries. The actress has been busy promoting the series abroad. She pledged to publicize the Gwangju Biennale in Korea and overseas, saying that it is more popular abroad for its artistic and traditional aspects and that she wants to contribute to improving its status through her overseas activities.

Meanwhile, appointment certificates have been also given to interpreters, management agents and volunteers. The 2009 Gwangju Design Biennale will kick off September 18 and will run through November 4. Apart from Jang, other PR ambassadors of the event include comedian Kim Yong-man and Japanese beauty expert Ikoshi.