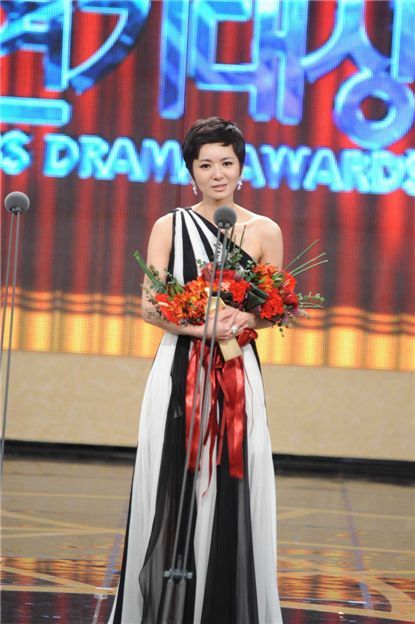 Jang was awarded the top honor for her role in "Temptation of Wife", which was one of the most-watched and most controversial dramas of the year for its sensational storyline.

"I didn't want to cry. I wanted to be cool about receiving [the award]".. said Jang in her acceptance speech. "I thought I wouldn't be able to win this because of the genre. I would like to thank writer Kim Soon-ok... I was in a slump for three years but she helped me make a comeback".

The actress also thanked her family, saying that they "have been my fence against the rough entertainment industry". She went on to say that in a few decades she aspires to be "an actress who receives the lifetime achievement award like [veteran actress] Ban Hyo-jung".

Drama "Shining Inheritance" was the big winner of the night, bagging a total of eight awards including the prizes for best couple, lifetime achievement and three Top Ten Star awards. "Temptation of Wife" also collected seven awards including the titles for grand prize, best supporting actor and young actor award.

"Boys over Flowers" actor Kim Beom gave a heartfelt acceptance speech after winning the Top Ten Stars award. "There is something I would like to apologize for. I'm still young and I think I might have, unintentionally, hurt and offended some people, and I am truly sorry".

The actor appears to have been referring to a legal dispute with his former agency which sued him on charges on violating his previous working contract. His current agency King Kong Entertainment was recently quoted as saying that they "do not want to be further involved in a muddy battle".

The ceremony featured musical performances by several ensemble casts including Lee Seung-gi and Han Hyo-joo, the cast of "Temptation of a Wife" and fictional idol group A.N.JELL from "You're Beautiful".

"Jang Seo-hee wins grand prize at SBS Drama Awards"
by HanCinema is licensed under a Creative Commons Attribution-Share Alike 3.0 Unported License.
Based on a work from this source