Japan Quake Explored in '3.11' at Short Film Festival in Seoul 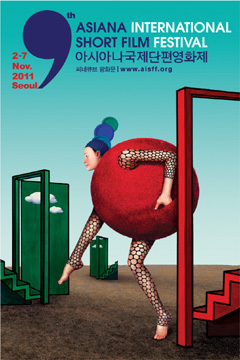 The devastating earthquake and tsunami in Japan in March that created a nuclear scare serves as the basis for "3.11 Sense of Home", a collection of short films about the horrors and aftermath of the quake. It features the works of 21 internationally renowned directors, including Thailand's Apichatpong Weerasethakul, Korea's Bong Joon-ho, who rose to critical acclaim after making "The Host" in 2006, Jia Zhangke of China and Japan's Naomi Kawase.

The movie will be screened at the 9th Asiana International Short Film Festival (AISFF) at CineCube in Gwanghwamun, Seoul, from Nov. 2 to 7. Some 54 short films from 35 countries will compete at the festival for a total of W33 million (US$1=W1,145) in prize money.

Breaking with convention, this year's AISFF will get under way with not one but two opening movies. "Etude" portrays a chance encounter between a piano tuner and his first love, while "Martin" is a Mexican film about a nine-year-old boy who wants to be a subway driver.

The prize-winning film in the international competition category will wrap up the affair. The shortest of the submitted films, at 3 minutes and 35 seconds, is "A Shitty Boyfriend", while the longest runs for 28 minutes and is called "Into Focus".

Shorts depicting serious social problems have drawn much attention this year. For more details of the festival, log on to www.aisff.org.

"Japan Quake Explored in '3.11' at Short Film Festival in Seoul"
by HanCinema is licensed under a Creative Commons Attribution-Share Alike 3.0 Unported License.
Based on a work from this source