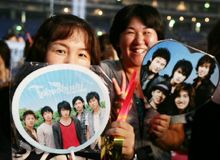 A survey finds that interest in Korean pop culture, or the "Hallyu Index", is highest in Japan. Hallyu translates into "Korean Wave", referring to the spread of South Korean culture around the world.

During a seminar on Korean pop culture held at the National Assembly Tuesday, Ko Jung-min, head of a local creative industry institute, said that the index was highest last year in Japan at 112, followed by Taiwan and China.

Overall, South Korean movies ranked as the most popular aspect of Hallyu, followed by music, broadcast programming and games.

The overall index came to 105 last year, up five points from 2008, reflecting the growing popularity of Korean culture among overseas consumers.

The institute produced the index based on the consumption of Korean pop content and on local surveys given to young consumers in foreign countries.