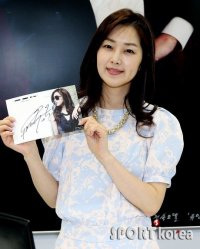 Japanese actress Fueki Yuko, known in Korea as Yuko Fueki, is making a comeback to Korea after a four-year absence. Starting from the seventh episode of the KBS 2TV drama "IRIS" this Wednesday, she will play a cold and astute intelligence agent in the Japanese cabinet.

Yuko Fueki starred in many successful Korean dramas including MBC's "My Home" in 2001 and was greatly popular among Korean fans for her innocent image. She went back to Japan and has been acting there. The producers of "IRIS" said, "We had a new character that suited Yuko Fueki, so while we were preparing for a location in Japan we made a proposal to her with the role".

"IRIS" will be the second show in which Yu Min has appeared with actor Lee Byung-hun, after the SBS drama "All In" in 2003. "I'm very happy to get to meet the Korean audience through this star-studded blockbuster drama", she said. "I'm excited about acting with Lee again. The shooting has been thrilling".