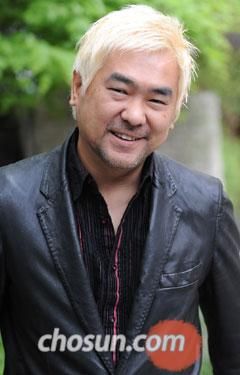 The Japanese film director Ryuhei Kitamura looks like an erratic high school student with bleached blond hair and pitch black eyebrows. In Korea for a meeting with a potential distributor for his new project, a film tentatively titled "Tae Kwon" for which the shooting begins later this year, Kitamura already has a deal with big Japanese production company Yoshimoto Kogyo to make the film, with the U.S'. Arclight Films in charge of distributing the film in North America and Europe.

The film, as the title suggests, is about Korea's Taekwondo. That a Japanese director should want to make it is not as improbable as it may seem. Born in Osaka, Kitamura quit high school in Japan and moved to Australia to study cinema and is currently working in Hollywood. A sports fanatic, he says he has tried almost every martial art, including Karate, Kendo and Judo.

His passion for action is reflected in "Azumi" (2003), an adaptation of a popular Japanese manga. Although it had an abysmal box-office record in Japan, the film was hailed in the U.S. for the uniqueness of its violence. His Hollywood debut "The Midnight Meat Train" (2008) was an adaptation of a short story by horror writer Clive Barker, and did respectable business.

"I want to make this film because I was enamored with the mysteriousness of Taekwondo. Given the worldwide popularity of the sport, it seemed odd to me that it's nearly impossible to find Taekwondo schools in Japan, when you can find it in just about every city in the United States", Kitamura says. "I took a one-day course about three years ago, and the sophisticated positions and movements seemed very mystical".

He said he feels something Korean running through his veins. "I felt the Korean spirit from my childhood, hanging out with Korean-Japanese friends. Sometimes when I watch my films, I feel like I'm watching a Korean film", he says.