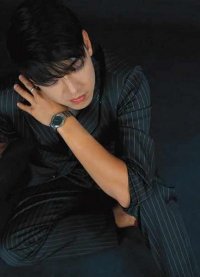 The popularity of Korean actor Ryu Si-won has become evident in Japan, as he has rescued a TV drama from dismal ratings by making a guest appearance. The NHK drama "Dondo Hare", guest starring Ryoo for a week between April 30th and May 6th, has soared to the No.1 spot in drama ratings and second in overall ratings.

"Dondo Hare" had been suffering dismal ratings since posting only 14.9% in its first episode, its worst performance ever. But the drama soared to the top during the week Ryoo guest starred, demonstrating the star power of Ryoo in Japan.

Ryoo appeared in "Dondo Hare" as a Korean actor who had once studied in Japan and now returns to Japan to find the love he had left behind. His romantic performance evidently thrilled Japanese fans.

It was Ryoo's first performance in Japanese, but he proved he was a veteran actor by performing naturally in fluent Japanese. He thanked his Japanese fans and promised to work even harder as an actor.