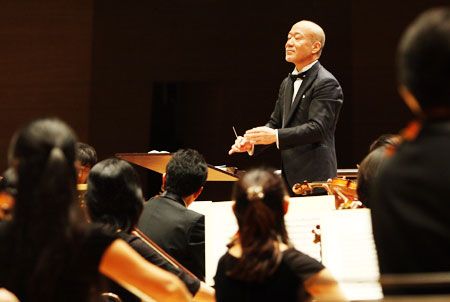 Joe Hisaishi, one of the most prolific composers in Japan of memorable film scores, will perform in Seoul for the first time in six years. The concert is part of his Asia tour after China, Taiwan and Hong Kong.

Hisaishi is known for creating delicate and melodic tunes which touch the hearts of the listeners by capturing the feelings and emotions of memorable scenes to perfect sounds.

Internationally recognized for his collaborations with Japanese animator Hayao Miyazaki in such works as "My Neighbor Totoro" (1988), "Howl's Moving Castle" (2004) and "Ponyo on the Cliff by the Sea" (2008). He also has a large fan base in Korea with the soundtracks for the Korean film "Welcome to Dongmakgol" (2005) and MBC's drama series "The Legend" (2007).

As the executive director, he also wrote the theme music for the opening ceremony of the 1998 Winter Paralympics in Nagano. He produced the masterpieces for the films directed by Takeshi Kitano.

For the upcoming concert, Hisaishi will perform with the Korean Symphony Orchestra, which has collaborated with world top musicians such as Placido Domingo and Jose Carreras.

He will present his memorable works such as "Summer", "One Summer's Day", and "Departures", along with new tracks from his latest albums.

"Japanese film composer to perform in Seoul"
by HanCinema is licensed under a Creative Commons Attribution-Share Alike 3.0 Unported License.
Based on a work from this source