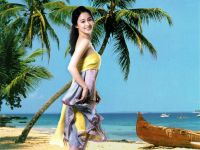 Actress Kim Tae-hee has gained recognition in Japan not only for her pretty looks but also for her intelligence as well.

Japan's broadcaster TBS will introduce Kim in a special show that deals with the laws of various countries of the world. The show's episode featuring Kim will introduce Korea's laws on educating talented children.

TBS will introduce Kim as a popular celebrity who is also a graduate of Korea's top university.

The TBS' show will once again underscore the high status of Korean celebrities by covering Kim, who is popular not only in Korea but in Japan as well.