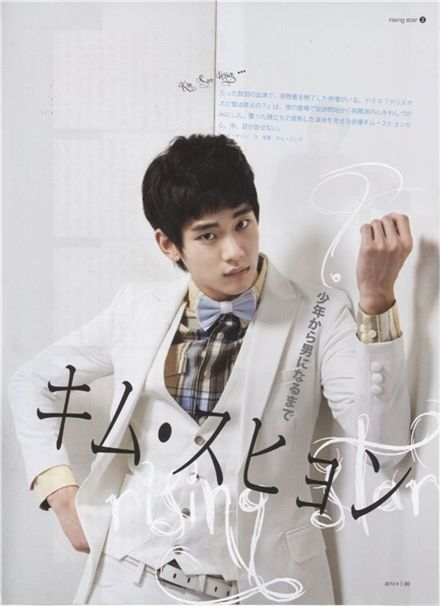 Japanese journalists have started to turn their attention to Korea's Kim Soo-hyun, signaling that the young actor may be headed toward gaining recognition in the country.

Kim's agency BOF Korea said Thursday that the actor was featured in the April issue of "Brokore", a Hallyu magazine in Japan, while also named one of the up and coming stars to watch for this year in the spring issue of another Hallyu publication named "Hallyupia".

Kim, 22, had appeared in two musicals, "Grease" and "A Midsummer Night's Dream" in 2003 before making his television acting debut in 2008 through MBC sitcom "Kimchi Cheese Smile".

With the increasing popularity of "Will It Snow for Christmas??", Kim is reportedly receiving interview requests from local media outlets and offers from Japanese entertainment management companies.

Kim is currently in shooting for upcoming SBS drama "Giant", scheduled to air in May.

"Japanese media turns eyes to Kim Soo-hyun"
by HanCinema is licensed under a Creative Commons Attribution-Share Alike 3.0 Unported License.
Based on a work from this source