This is the second and last of a two-part series examining the voting behavior of naturalized citizens. - ED. 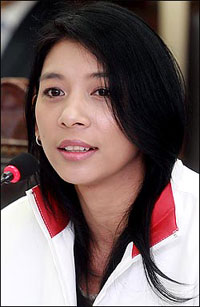 The ruling Saenuri Party has placed a naturalized citizen high on the list of proportional representatives, obviously hoping to draw the support of the majority of 110,000 foreigners who have been accepted as Koreans in the upcoming April 11 parliamentary elections.

Jasmine Lee, a 35-year-old naturalized woman from the Philippines, was given No. 15 for seats granted according to the number of votes a party gains. Saenuri is expected to win at least 18 out of 54 such proportional representation seats at stake.

The Migrant Voters Alliance (MVA), the advocacy group made up of nongovernmental organizations and foreign residents, said that putting Lee on the ticket scored big with naturalized voters.

"Many immigrants, including myself who have lived here for more than 10 years, have little knowledge about candidates and political parties they represent", said Iresha Dilani, head of Talk to Me, one of the migrant women's volunteer groups participating in the MVA.

"Since it is very difficult for migrants to distinguish a political party from the others, a large number of them will likely end up voting for the Saenuri Party this time as it granted a seat to a foreign-born citizen".

The 36-year-old woman with Pakistani roots said that she felt guilty after casting a vote in the last local elections in June 2010 because she was not sure whether the candidate of her choice would better represent the interest of migrants than the others.

Kim Joon-sik, head of Asian Friends which also belongs to the MVA, concurred with Dilani, saying it remains a challenging job for migrant women to make an informed decision in elections.

He also noted that the Saenuri Party will likely attract more votes from migrant families than any other parties as its nomination of Lee has helped establish a strong bond with them.

"Given that the number of immigrants by marriage has reached the 200,000 mark, immigrants will have a direct and indirect influence on about 1 million votes, including the ones their family members have", he argued.

"I think it was a very wise move for the Saenuri Party to put Jasmine Lee on the proportional representation list".

However, he expressed regret over the ruling party's failure to address issues that the foreign population in Korea faces in the parliamentary elections, such as the rights of 20,000 school-aged unregistered immigrant children.

"I have yet to find a candidate or a party that has shown a genuine interest in tackling difficulties that foreigners have encountered", Kim said. "It is a pity that the Saenuri Party could not push through legislation that guarantees basic rights for children regardless of their parents' legal status".

He underlined that politicians should pay more attention to the voices of migrants as they will soon emerge as a crucial group that determines the outcome of the political landscape as at least one in 10 Koreans marry a foreign born national.

Ju Gun-ihl, a team leader of Seoul YMCA, noted that the MVA has given up analyzing campaign promises of different parties as all the attention has been paid to individual candidate's capabilities and personal qualities, rather than their commitment to voters.

She underlined that politicians do not have to make a big compromise in order to serve the interests of naturalized Koreans as their interests are similar to a big layer of voters in the Korean majority.

"I'm well aware that (immigrant) candidates may not quite fit the requirement of proficiency in legislature which is important for law-making", she said. "Nevertheless, the number of naturalized Koreans is growing and a naturalized Korean candidate would in most cases represent the interests and concerns of lower or lower-middle classes and these interests and concerns are no different from a very big segment of the native Korean population".

In 2010, the Saenuri Party, then the Grand National Party, placed Lee Ra from Mongolia as No. 1 on the list of its proportional representation candidates for a local council in Gyeonggi Province, making her the first foreign-born councilor in Korean politics.