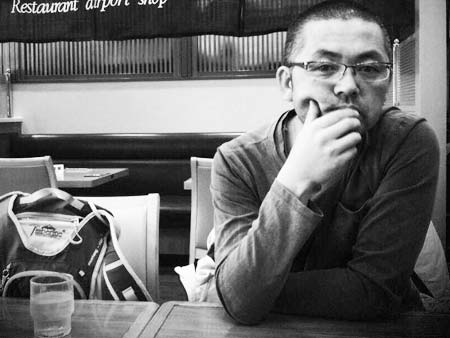 Even to Koreans, words in the Jeju dialect sound alien.

The tropical island off the country's southern coast has long been a honeymoon hotspot but also a cradle for quirky cultural traditions that cannot be found on the mainland, from "haenyeo" (female divers) to volcanic landscapes that have been listed as UNCESO World Heritages.

O Muel, a Jeju native, has been stirring up the local indie scene with two films showing in theaters. Not surprisingly both works capture the rustic spirit of the region, though with a contemporary, modern and humorous edge that won him a jury award at the Jecheon International Music Film Festival.

His directorial debut piece, "Nostalgia", traces a pair of impassioned amateur musicians begging a once promising rocker to be their guiding light, while the latter deals with his mother's death. "Pong Ddol", which refers to the stone and metal objects attached to the end of a fishing rod, traces the trials and errors of a first-time filmmaker.

The films are marked by an oddity, particularly the local songs that elderly women sing that sound exotic to many Koreans, but also intimate through universal themes of friendship and family. And there is that rough, experimental, and sometimes even charmingly amateurish quality inherent to indie flicks.

Not surprisingly O jumped into the project "for the sake of creating something my friends and I could make and watch for ourselves".

"I'm amazed that the film is being shown", O said in Seoul in a recent interview. "The music that appears in the movies really caught the attention of the Jecheon Film Festival, but it's something that I grew up with. It's nothing new. I just tried to capture it in a natural way that felt right to me".

Much like the characters in "Pong Ddol", it was not easy working on a budget of less than $8,000 for each film. There were lighting problems for the audition scene. Due to the mercurial nature of the local weather, where it is raining one minute and sunny the next, the exposure was difficult to control.

But O and his cast and crew were well coordinated, possessing polished teamwork through their theater troupe and developed organizational skills through an annual art festival they founded. Moreover, they were able to persevere through a state of mind.

"It's true that money is really important in the film industry. But saying you cannot do something because of budget constraints means that you're trying to make money. Creativity is all about trying to express your thoughts and philosophy, and that's all there is to it. That is why we were able to come this far, to see our films release", he said.

But they stem from more than a wish to portray his hometown with a certain understanding.

"Jeju is receiving renewed attention for tourist attractions such as the Olle Trails, the construction of a navy base and yes, the prospects of becoming a new Natural Wonder site, but such developments sadden me", O said.

"The Olle Trails supposedly reveal the secrets of the island, but once revealed they are no longer secrets. It really strikes me as shocking that a lot of Seoulites don't see urban development of natural areas as a bad thing".

The filmmaker said in the future he hopes to explore more local issues such as the April 3, 1948 riot, which remains largely forgotten by many Koreans but is a painful scar for Jeju Islanders.

"It was never my goal to make films about Jeju Island. But the island and I are in one in body and spirit; my mother and father may have given birth to me but the island raised me. I simply want to pursue works through which I can stay true to myself".

"Jeju filmmaker captures local quirks"
by HanCinema is licensed under a Creative Commons Attribution-Share Alike 3.0 Unported License.
Based on a work from this source