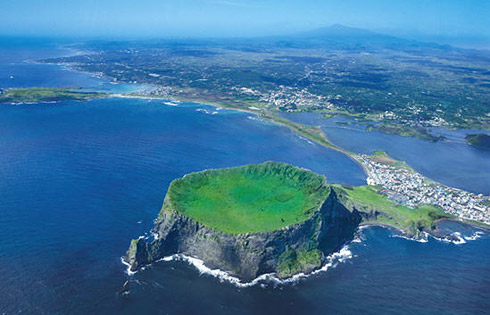 Jeju Island has been chosen among the New 7 Wonders of Nature. The Swiss-based organization New 7 Wonders Foundation announced the final selection on its website on Saturday.

The new seven wonders, which were announced in alphabetical order, also included the Amazon in Brazil, Halong Bay in Vietnam, Iguazu Falls in Argentina, Komodo National Park in Indonesia, Puerto Princesa Underground River in the Philippines and Table Mountain in South Africa. The rankings were not announced.

They were chosen from a list of 28 natural sites around the world tallied by the New 7 Wonders Foundation through a global survey conducted from July of 2009 until Friday through the Internet, telephone and other media.

Jeju hopes the selection will further boost its tourism industry, which is already seeing a boom inspired by Chinese travelers. The Jeju Development Institute forecast that the island's selection on the coveted list will lead to a 73.6 percent jump in the number of foreign visitors each year, or an extra 572,000 people. It also expects an 8.5 percent rise in the number of domestic visitors for an additional 578,000 visitors each year.

"Jeju has already benefited immensely as the island was promoted to 1 billion people over three years during the voting process", said Jeju Governor Woo Keun-min. "Our inclusion on the list will open a new chapter for the island in terms of not only tourism but also all other business sectors".

Jeju plans to form an agency promoting exchanges with the 27 other finalists and develop travel packages built around the island's natural resources to appeal more to foreign tourists.