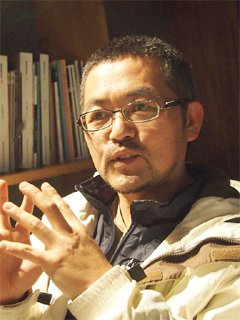 O Muel's film "Jiseul" picked up the World Cinema Jury Prize at the Sundance Film Festival on Saturday, making it the first Korean film to win the prize in the competition section at the festival.

Directed by the Jeju native, entire scenes of "Jiseul" were shot on the island and all the cast were local actors speaking their natural dialect. The festival organizer described the movie as "extraordinary" and said the jury had chosen it by a unanimous decision in less than a minute.

O, who returned to Korea one day before the award ceremony, said in a telephone interview with the Chosun Ilbo, "I spent most of my time at theaters [in Utah] watching other films, so I wasn't able to hear whether critics there appreciated my film. I never imagined I'd win the award".

"Jiseul", which was shot in black and white, is based on the true story of villagers who hid in a cave to escape from a military attack amid an ideological conflict in 1948. Jiseul means "potato" in Jeju dialect.

"Potatoes are considered a staple food in many countries, often symbolizing survival and hope. That's why I picked it as the title of my film", said O.