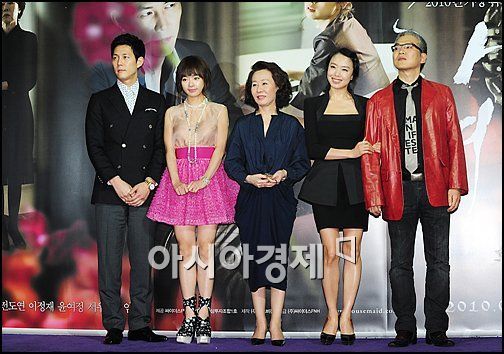 Korean actress Jeon Do-yeon, her co-stars in "The Housemaid - 2010" and director Im Sang-soo have left for the Cannes Film Festival.

The four, who departed Thursday morning, will be arriving at Cannes in the afternoon (France time) and staying at the luxurious Hotel Martinez -- courtesy of the organizing committee for the director and lead actors in films invited to the "In Competition" category.

Actress Seo Woo will be unable to attend the event having to fulfill the shooting schedule for her current hit KBS TV series "Sister of Cinderella".

The premiere screening of "The Housemaid - 2010" is scheduled for today afternoon, at 4:30 p.m. (local time), while the official gala screening will be held the following day at 10:30 a.m. Interviews with the local press and other red carpet events are to be carried out on Friday.

"Director Im Sang-soo and Jeon Do-yeon are receiving many interview requests from media outlets on site", an official related to "The Housemaid - 2010" told Asia Economic Daily.

Considered one of the most formidable actresses in Korea, Jeon gained international recognition three years ago when she was named best actress at Cannes for her lead role in the film "Secret Sunshine", directed by Lee Chang-dong.

As Jeon returns to the film fest for the first time since her 2007 win, her former director Lee also got invited back this year for his new movie "Poetry", also in competition.

"The Housemaid - 2010", co-starring actor Lee Jung-jae and veteran actress Youn Yuh-jung, is a story about a young maid who comes to work for a wealthy couple and starts having an affair with the husband.

The film, a modern adaptation of an old Korean classic, opens in Korea today.