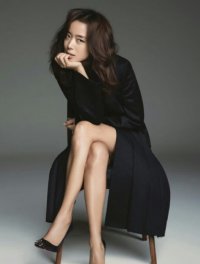 Actress Jeon Do-yeon seems to have it all, having won the Best Actress award at Cannes last year and about to enter motherhood. In time for the release of her latest movie "My Dear Enemy", the 35-year-old, five months pregnant but looking svelte in a colorful construction dress, met with The Korea Times in a private press meeting Friday.

"I'm super healthy, I actually wish I had morning sickness", joked Jeon, who is expected to deliver her first child at the end of January. The actress rose to international prominence for her role in "Secret Sunshine" as a woman traumatized by her son's death. "I was afraid I was portraying a stereotypical mother figure in `Secret Sunshine', but the director (Lee Chang-dong) assured me that my interpretation is probably right. If I were to tackle the role again after having my own child, it would probably be different", she said.

"`Secret Sunshine' was challenging because the director left everything completely up to me, and I felt cornered. When I'd tell him I didn't know how to interpret something, he would say he didn't know either", she said. She said she simply wanted to rest after wrapping up the emotionally draining film.

The torment paid off with the much coveted prize at Cannes. But the "Queen of Cannes" felt like a nobody at the festival. "No one knew me, nor had any information about me even after watching `Secret Sunshine'. Seeing all these cineastes and actors I grew up watching was greatly inspiring but it also affected my self-esteem. It made me realize that there is a lot I still need to achieve in the future", she said. Following the international spotlight, the actress did receive a few offers for artistic foreign films and was invited to film festivals around Asia. She was also interviewed by CNN.

About possible a foreign film debut, however, she said it would be unlikely to happen in the near future. "First, the language barrier is there. I'm an actor who always thought dialogue wasn't very important, because people don't speak perfectly in real life. But if I were to deliver lines in a foreign tongue, or if my lines were to be dubbed, it's doubtful whether or not it would be natural. (Making a foreign film debut) would be more rooted in ambition than genuine passion", she said. "But I would like to learn English so I can converse with (non-Korean) actors and cineastes", she said.

"My nickname (Queen of Cannes) is the only thing that changed", she said about her post-Cannes life in Korea. Jeon expressed concern about the dwindling domestic film market. "I do get maybe one or two more scripts than I normally would, but with the number of films being produced cut to half, I think all the other actresses are struggling as well", she said.

The Cannes title was a big burden for her, but she chose "My Dear Enemy" for its amusing story about a single unemployed woman in her 30s spending an awkward day with her ex-boyfriend. "I was really scared because I felt overrated (for `Secret Sunshine'). But my heart feels a lot less heavy now because (`My Dear Enemy') turned out well", she said. "My husband thought I was being myself", she said about her stubborn, ill-tempered character. "You might laugh, but I'm actually quite winsome and charming", she protested.

Jeon has starred opposite some of the most reputable South Korean actors. She made her big screen debut in 1997 in "The Contact" with "Shiri" (Swiri)' star Han Suk-kyu, followed by works including "Happy End" opposite "Old Boy" hero Choi Min-sik; "Untold Scandal" with hallyu superstar Bae Yong-joon; and "Secret Sushine" with "The Host" leading man Song Kang-ho. She appears in her latest movie with Korea's rising star Ha Jung-woo ("The Chaser").

"If Song Kang-ho is like a preying beast, Ha Jung-woo is like a bunny who can swindle someone's liver", she said, comparing Ha to the Korean folk tale bunny that can talk a king into selling his liver. "He's a very versatile actor", she complimented Ha. Looking back at her acting career, she said "The Contact" was unforgettable because it was her first movie, and "Happy End" helped define herself as an actress while "Secret Sunshine" made her break herself down.

About taking a break from acting for the baby, she said getting roles might become more difficult. "I think things will get tougher. I have no idea", she said. "Now that I'm about to have a baby, I realize that mothers aren't made to be mothers", she said, explaining that one does not necessarily have to be perfectly prepared to become a parent. But one thing she's sure about is that she wants to become a trusting parent who can have complete faith in her child.

But trust is perhaps key to everything, including movies, like director Lee Chang-dong's utter faith in Jeon for her award-winning role, as well as Lee Yoon-ki's confidence in the screen beauty for her charismatic performance in "My Dear Enemy".

"My Dear Enemy" is due in theaters Thursday. Spongehouse is hosting a Jeon Do-yeon retrospective through Oct. 1 featuring some 10 films. Spongehouse Gwanghwamun is located near exit 6 of Gwanghwamun Station on subway line 5. Call (02) 2285-2095.

"Jeon Do-yeon on Pregnancy, Post-Cannes Film"
by HanCinema is licensed under a Creative Commons Attribution-Share Alike 3.0 Unported License.
Based on a work from this source