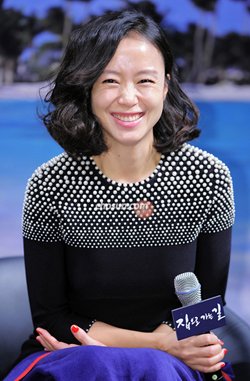 Actss Jeon Do-yeon spent time with real prison inmates in preparing for her role in a new film, "Way Back Home".

The film is based on the true story of a housewife in her 30s who was wrongly arrested for drug trafficking at Orly Airport in France in 2004, and who spent two years in a prison on the remote island of Martinique in the Atlantic.

Expectations are building for the film as it stars Jeon and heart-throb Go Soo.

At a press event for the movie in Seoul, Jeon talked about the experience of filming it using inmates of a prison in the Dominican Republic.

"At first, I was scared of acting with real prisoners. But they were interested in filming and excited about participating", she said. "Some were really enthusiastic about acting because they want to become an actor, and they ended up playing minor roles in the film".

Directed by Pang Eun-jin, the movie is scheduled to hit theaters here in December.

"Jeon Do-yeon Plays Inmate on Tropical Island in Latest Flick"
by HanCinema is licensed under a Creative Commons Attribution-Share Alike 3.0 Unported License.
Based on a work from this source