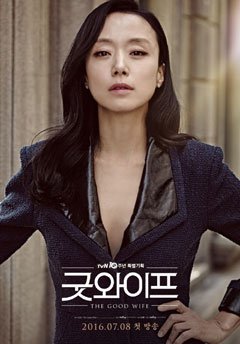 Actress Jeon Do-yeon, who returns to TV after a hiatus of over 10 years, is being kept busy with a tight shooting schedule for her upcoming TV series, her management agency said.

Jeon will appear in a remake of the hit U.S. TV series "The Good Wife", which is set to be aired next week.

She plays a woman who resumes her career as a lawyer after 15 years of being a homemaker when her husband is jailed following a political corruption and sex scandal.

"Jeon Do-yeon Puts in Last-Minute Push for Upcoming TV Series"
by HanCinema is licensed under a Creative Commons Attribution-Share Alike 3.0 Unported License.
Based on a work from this source