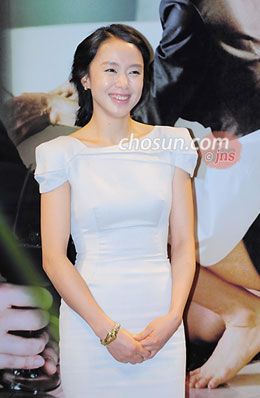 The film is a remake of 1960 film "The Housemaid - 1960" of the same title by the late director Kim Ki-young. In the press conference held on Tuesday, Jeon shared her story of how she had to endure two months of physically demanding action ranging from sex scenes to wire-stunt scenes.

"While shooting the film, I was reluctant to continue at times because of the nude scenes", Jeon says. "But my family gave me huge encouragement. My husband did not want me to change what roles I choose just because I'm married and cheered me on. I was very grateful for his encouragement and support".

The new "The Housemaid - 2010" is directed by Im Sang-soo, who is known for his unconventional portrayal of sex in films like "Tears", "Girls' Night Out", and "A Good Lawyer's Wife". In the film, according to Jeon, "There will be not only the joy of watching but also listening".

Lim said, "The plot is the same as the original, but you'll be able to see a big difference in the depths of expressiveness of actors and images". He added, "It's my first time shooting a film with such a star-studded cast. That reflects how ambitious I was about this project. Enjoy watching it. I leave it to your judgment. I'd love to shock the audience with the film".