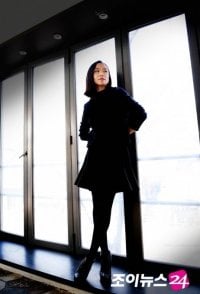 In what has grown into a highly anticipated Fall feature, Lee Yoon-ki's "My Dear Enemy" will mark Cannes-winning Jeon Do-yeon's return to the big screen, with a local release scheduled for September 25th. The at-one-time low-profile film has generated media buzz for its pairing of JEON and actor in the limelight Ha Jung-woo. JEON has won numerous Best Actress awards for her role in Lee Chang-dong's "Secret Sunshine" (2007).

HA caused a sensation for his tense performance in the year's first runaway hit, "The Chaser", in which he played a psychotic prostitute killer. He then returned to screens as a charming but sleazy male host in Moonlight in Seoul. In "My Dear Enemy", he plays JEON's undependable ex-boyfriend Byeong-woo. The two have acted together previously, when HA had a supporting role as JEON's bodyguard in the hit TV drama "Lovers in Prague" (2005).

In the new film, JEON plays Hee-soo, an unemployed single woman in her mid-30s, who decides to collect on an outstanding debt her ex-boyfriend owes her. The two spend an unusual day together as Byeong-woo tries to gather the money together by borrowing from other female friends.

Director LEE has claimed much critical attention for his previous three films. His previous feature, "Ad-Lib Night" screened in the 2007 Berlin Film Festival. Both "Love Talks" (2005) and "This Charming Girl" have screened at the Pusan International Film Festival with the latter winning the New Currents best feature award in 2004.

Produced by b.o.m Film and Sponge Entertainment, the film is being distributed locally by Lotte Ent.

"JEON Do-yeon Returns to Screens Sept. 25 "
by HanCinema is licensed under a Creative Commons Attribution-Share Alike 3.0 Unported License.
Based on a work from this source