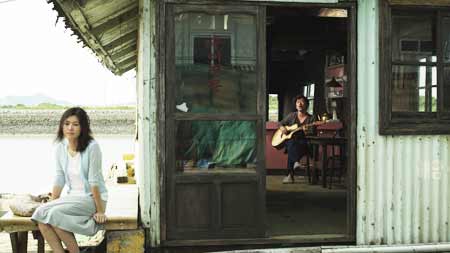 Art house favorite Jeon Soo-il brings yet another slow, stark drama that reveals the grit and beauty of ruins.

Having premiered earlier this month at the 16th Busan International Film Festival, "Pink" incisively examines the nature of implosive violence and psychosexuality through the squalor of a desolate port town.

It is destined for hotwire the international film festival circuit and art houses, while the big screen comeback of seasoned actress Seo Kab-sook and acting debut of rocker Kang San-eh may attract niche audiences here.

After taking viewers from an abandoned mining town (in the multiple award-winning "With a Girl of Black Soil") to the Himalayas ("Himalaya, Where the Wind Dwells"), the director presents a pub and its ruinous environs that feel all too real.

The bar, eponymously called Pink, and the desolate lives that are centered there, are far from rosy. Like Jeon's other works, the film is all about creating an atmospheric landscape and the withered characters are but details of the peculiar scenery - physical extensions of the withered "makgeolli"-stained tables or the refrigerator randomly tossed out on the mudflat, which the tides swallow and vomit back up twice daily.

Lee Seung-yeon-I, not to be confused with the beauty queen-turned-actress of the same name, plays her first lead role after appearing in memorable supporting roles in indie flicks such as "My Dear Enemy" and "Breathless". She unleashes a quiet tour-de-force as Su-ji, a mild-mannered woman who exudes beauty in her simple, makeup-free visage and unassuming melancholic air.

The viewer is introduced to all the curious quirks of the village through outsider Su-ji. She has moved there to lodge and work for Ok-ryeon (Seo), a 40-something-year-old who runs Pink while raising her autistic teenage son Sang-guk by herself.

Ok-ryeon becomes increasingly preoccupied with demonstrating against urban development plans that would force locals to move out of their longtime homes, and Su-ji is left to look after the bar and Sang-guk (convincingly played by Park Hyun-woo). Our introverted protagonist makes an effort to deal with customers that are much too eager to befriend her and the silent boy who refuses to attend school.

She warms to her new home, as she forms an intimate bond with Sang-guk, responds to the advances of a flirtatious fisherman and leans into the music of a vagabond singer (Kang). But just when viewers become acquainted with the strange surroundings, Su-ji's own mysterious, unveiled past becomes the subject of inspection - much like how after staring at an Oriental landscape for a while one begins to notice the tiny humans hidden behind trees.

Su-ji on the other hand manipulates men with her passive-aggressive behavior and initiates somewhat inappropriate activities with Sang-guk.

In exploring such psychosexual themes, Jeon opts for long shots that ebb and flow like a series of still life photographs, accompanied by the occasional lilting music by Kang. But there is nothing meditative or calm about it; it is decidedly noir, with the sensibilities of both a smart thriller and rambling, drawn-out fantasy.

Yet, just as the forsaken ruins emanate hints of run-down charms there are also moments of humor that uplift the solemnity. Moreover, there is a saving grace in Su-ji's optimistic effort to move on and live. Pink thus becomes more than a place for the traumatized to gather and lick their wounds but a haven where one can fully embrace both the grit and beauty of life.

A Mountain Pictures release, "Pink" opens in theaters Oct. 27. It is rated 18 and over, and runs 97 minutes.

"Jeon explores psychosexuality in 'Pink'"
by HanCinema is licensed under a Creative Commons Attribution-Share Alike 3.0 Unported License.
Based on a work from this source