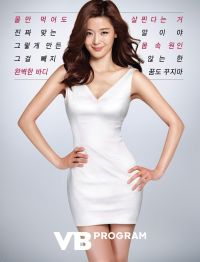 Jeon, one of the top Hallyu stars, is undergoing a name change as she makes her debut in Hollywood.

Her management agency SidusHQ recently announced Jeon has been cast in the role of a vampire hunter named Saya in the film "Blood: The Last Vampire". The film is a remake of a Japanese anime film by Oshii Mamoru.

For her first Hollywood role, Jeon has decided to change her name to Gianna Jeon. This move has drawn mixed reactions from her fans.

Her agency said Jeon will use the Italian-sounding name Gianna for her roles in the United States and other English-speaking countries. Jeon will still use her Korean name in Asia, where she is already well known. .

Jeon's name change is in contrast to actress Kim Yunjin, who retained her name when she moved to Hollywood. Kim stars in the hit TV series "Lost".

Although "Blood: The Last Vampire" is still in production and will be released in 2008, Jeon's involvement in the film has attracted a lot of attention. The action-packed film will be shot entirely in English. Jeon has reportedly been studying hard to learn English for the past few months.

The film will also star Allison Miller, who has appeared in guest roles in "Desperate Housewives", "CSI" and "Cold Case".

Jeon's move to Hollywood has drawn comparisons to Chinese actress Ziyi Zhang, who attracted Hollywood's attention with her role in the successful film "Crouching Tiger, Hidden Dragon". Zhang is known for her marital arts roles in films like "Hero" and "House of Flying Daggers", but has moved on to roles in English films such as "Memoirs of a Geisha". She is now considered one of the most well known Asian stars in Hollywood.

Jeon started her career as a model and debuted as an actress in "White Valentine" in 1999. However, it was her role in "My Sassy Girl" (2001) that undoubtedly made Jeon a star.

Despite this, Jeon is still considered one of the top stars when it comes to advertising. She continues to appear in dozens of commercials for cosmetics, beverages and cell phones.

Jeon may be hoping to leave behind her losing streak at the Korean box office when she goes to Hollywood.

Hollywood is already familiar with Jeon's works, such as "Il Mare", which was remade as "Lake House" starring Keanu Reeves and Sandra Bullock.

The Hollywood remake of "My Sassy Girl" is currently in production. Elisha Cuthbert, who is known for her role as Kimberly Bauer in the TV series "24", will play Jeon's role. Also starring in the movie is Jesse Bradford, who starred in "Flags of Our Fathers" and "Bring it On". The film is scheduled to be released later this year.