Ji Jin-hee says "happy to break stereotype" as a king 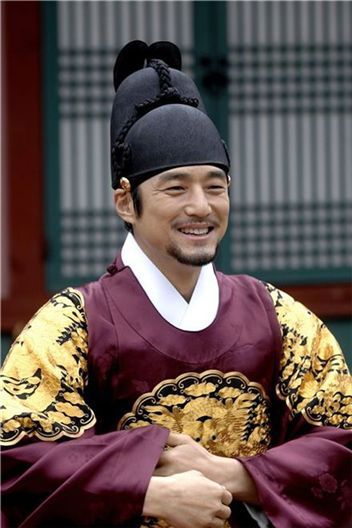 The introduction of the "adorable King Sook-jong" was a landmark event for MBC TV series "Dong Yi" and the history of traditional dramas on the small screen. King Sook-jong is shown as a king who showers his royal blessings upon his servant court ladies with a bright smile, and one who runs around freely when he goes outside the palace walls for the first time. While the new character might have been born from director Lee Byeong-hoon's reinterpretation and writer Kim I-yeong's script, it was actor Ji Jin-hee who completed the transformation. We met the actor, who is showing new potential as a comic actor through KBS TV series "He Who Can't Marry" and film "Runaway from Home", at the joint press interview held May 6 on the Yong-in set of "Dong Yi".

Q: In the beginning of the series, King Sook-jong's secret travelings caused quite a stir.
Ji Jin-hee (Ji): To be honest, I never imagined that he would have such qualities. I thought, 'He is just a king, how far could he go?' But not only did he travel very far but he only went out at night because he wanted to see how commoners really live. That scene actually shows pretty briefly on the screen, but we have been going to all sorts of places and shooting five days a week for it. Luckily, I like it because there are a lot of funny scenes and I was able to break the viewer's stereotype of playing a character who is a king.

Q: But he is still a king -- don't you feel that your character was too caricaturized?
Ji: I think that is a matter of perspective. Aren't people saying that because the King Sook-jong in "Dong Yi" is more interesting and provocative compared to how he was portrayed in the previous dramas? Of course, I did worry a lot over how the viewers would respond. But the producer had the skill to break old stereotypes and we are getting a positive feedback, so we are having fun shooting the show.

Q: The producer's skill is important too but, to everyone's surprise, you looked very natural doing comedy in KBS drama "He Who Can't Marry" and film "Runaway from Home". Like you have been doing it all your life.
Ji: I used to say in many interviews that I wanted to do comedy acting later. I love watching sitcoms and comedy programs, and isn't it better to do fun stuff in life anyway? But I really wanted to be good at melodramas and serious stuff first, and I thought it would be nice to show my funny side when I got older. But unlike dramas, the movies that I thought would be commercially successful weren't very big hits at the box office. So I thought maybe I was out of touch with the times but I am actually getting a good response when I tried comedy and a lot of compliments too. I'm starting to wonder if my future lies in comedy. (laugh) But more than anything, I think I am just getting a kick out of playing a royal character like I do on the show.

Q: You play an incredibly jolly character and have relationships with many characters in the story. What is the atmosphere on the set like?
Ji: Several days ago, I was at home waiting for the script to arrive and on standby for the shoot. But then when we were told the script was coming out tomorrow and we couldn't shoot today, everyone on the set decided that we should all go out for drinks. They called me on their way to Seoul from Ilsan, and so I went out to drink rice wine with them. It was two in the morning and my wife asked me if I was going out to shoot. I told her I was going out for a drink and then she was worried about the not script being ready. But we actually had fun that night for the first time since we started working together. Everyone was there -- Queen In-hyeon (actress Park Ha-sun), Ok-jeong (Lee So-yeon), Cha Chun-soo (actor Bae Soo-bin), Dong Yi (Han Hyo-joo) and Official Suh (actor Jung Jin-young). We became much closer drinking and talking about our concerns. I like things like that.

Q: On the set, who is the type to soften the atmosphere?
Ji: Jung Jin-young is incredibly jolly on the set. Even when he doesn't have any scenes to shoot, he goes around and talks with people, like the props staff and wardrobe people. So there is nothing he doesn't know about. He knows everything that happens on the set, like why the script isn't ready yet.

Q: The atmosphere sounds great but it must be an exhausting job physically. At the press conference, people thought you would have it easier because you play a king.
Ji: The weather is colder that I thought it would be. (laugh) But I have it better than Cha Chun-soo because he is always running around on snow-covered fields and falling down on the snow. When you read the script, it is extremely scary. In the eighth episode where Chun-soo appears in the show again, the script reads something like 'Chun-soo gets rescued from the water'. Actor Bae Soo-bin was expecting that he would just be lying on a sandy beach but the writer tells him to jump in the water. Once he was up on a cliff for several hours because the script said that Chun-soo was "doing something on a cliff". Anyway, I have it a whole lot easier than that guy.

Q: How is it having to constantly put on and take off your moustache for the show? I heard it irritates your skin a lot.
Ji: It’s been causing a lot of problems to my skin. I haven’t been able to sleep a lot either so the dark circles under my eyes are so bad that I have to wear heavy make-up. I’m in a sad situation. But very gratefully, a Japanese fan of mine sent me a remover I can use when I’m taking off my moustache. I usually almost faint when taking it off because I have to use petroleum but this doesn’t smell at all. It’s a jackpot product so I’m secretly using it for myself. (laugh)

Q: It’s undeniable that the ratings for your show plays a part to the atmosphere on set. They’re good but you could have expected ratings similar to “Dae Jang Geum.”
Ji: I don’t think we should be comparing with “Dae Jang Geum.” Will there ever be a drama like that ever again? I think the two are being compared because producer Lee and I are working on it but I believe that we’re in a different situation from then. There are a lot of fun dramas out these days. And our ratings aren’t as high as they were for “Dae Jang Geum,” but they’re still pretty high. (laugh) I’ve been having fun shooting the show and haven’t paid attention to the comparisons. There is an anticipation that comes from seeing Dong Yi who is a new character and Jang Hee-bin and Suk-jong who have been re-interpreted. I think the ratings would go up if we shot it to be interesting.

"Ji Jin-hee says "happy to break stereotype" as a king"
by HanCinema is licensed under a Creative Commons Attribution-Share Alike 3.0 Unported License.
Based on a work from this source