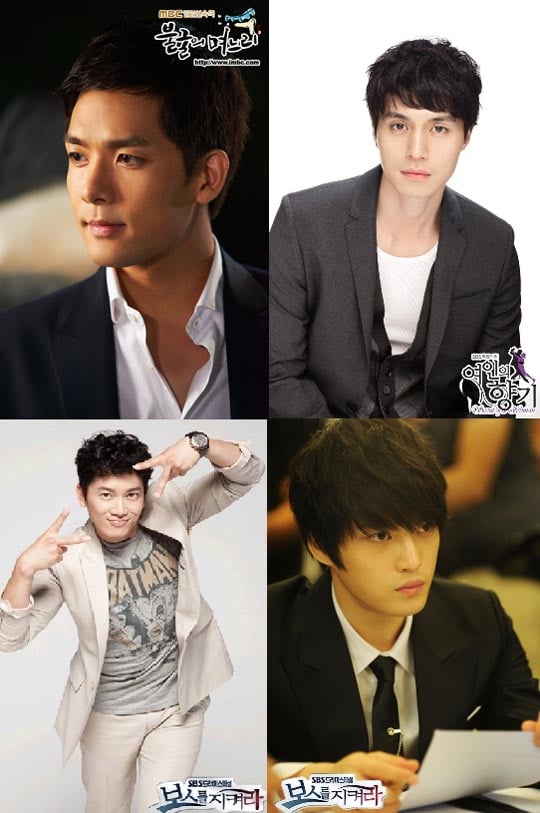 Lately, the TV screens are filled with characters who are high-level executives and company directors, such as Cha Dong-joo (Kim Jae-won) from the recently finished popular MBC drama "Can You Hear my Heart", Song Yoo-hyun (Micky Yuchun) from MBC "Miss. Ripley", Moon Sin-woo (Park Yoon-jae) from MBC "Indomitable Daughters-In-Law", Kang Ji-wook (Lee Dong-wook) from SBS "Scent of a Woman", and Cha Ji-heon (Ji Sung) and Cha Moo-won (Kim Jae-joong) from "Protect the Boss".

Park Yoon-jae from daily MBC drama "Indomitable Daughters-In-Law" is the director of Queens Group. He is a complete perfectionist in education and work, and despite everyone's objection, he is in love with a widow (Shin Ae-ra).

Cha Ji-heon and Cha Moo-won from SBS drama "Protect the Boss" are directors #1 and #2 of the business strategies department. Unlike other meticulous directors, Cha Ji-heon is a trouble-making mystery man, but these flaws make him somewhat different from the other directors in an innocent way.

On the other hand Cha Moo-won is daring towards the women he likes and expresses his feelings without hesitation. His brusque and passionate image appeals to female viewers as chic and smart.

Kang Ji-wook from the SBS weekend drama "Scent of a Woman" is uninterested in everything and has no will power. However, by changing his ways of life thanks to a woman he loves, he reveals that he's very caring type to those he loves.

Executives and department heads have now become a regular source for characters in dramas. Female fans have fun choosing different executives every day of the week.

"Ji Sung, Kim Jae-joong, Lee Dong-wook and Park Yoon-jae playing corporate executives"
by HanCinema is licensed under a Creative Commons Attribution-Share Alike 3.0 Unported License.
Based on a work from this source