Ji Sung shows tears during his concert, "I used to have only one fan" 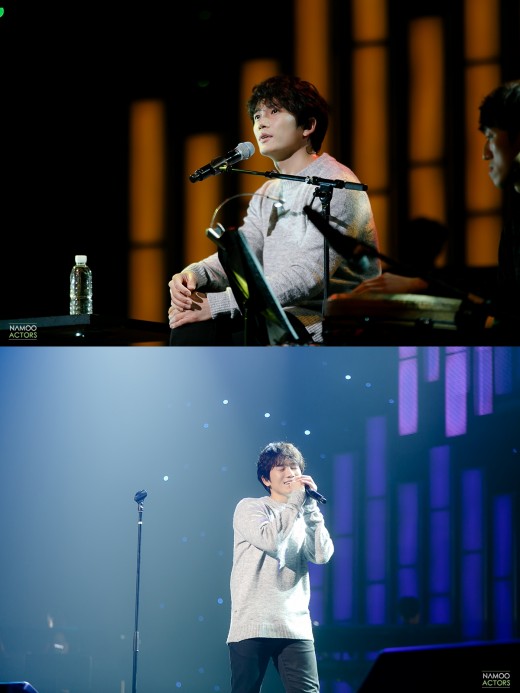 This concert, which was organized to communicate with his fans, was carried out with a live music band. The audience went wild while Ji Sung sang over 10 songs including his original sound track and other songs requested from his fans.

When he sang a song by ABBA, which was the first pop song that was introduced to him when he was little, he became overwhelmed with emotions. He said, "When I appeared in my debut drama, "KAIST", I had only one fan. The person asked me for an autograph, I didn't have my own autograph at the time. I couldn't even imagine then I'd be holding a concert in front of so many fans like this". He cried hot tears.

Ji Sung's agency said, "Although we did a concert in Japan, it's not familiar for an actor to have a concert like this in Korea. So it wasn't easy. He chose singing as a way to communicate with his fans outside acting. It was a venue for him to show his true heart towards his fans and share his life story" and "When he jumped into the audience, staff members of our agency stood up startled. Thanks to the great reaction and good manner from the audience, the concert could end successfully".

Ji Sung brought the 'Kill Me, Heal Me' character with the seven different personality to life perfectly. He is now a strong favorite candidate for the Grand Prize winner of the upcoming year end awards. He also has been offered many roles from various projects and is selecting an offer carefully.

"Ji Sung shows tears during his concert, "I used to have only one fan""
by HanCinema is licensed under a Creative Commons Attribution-Share Alike 3.0 Unported License.
Based on a work from this source