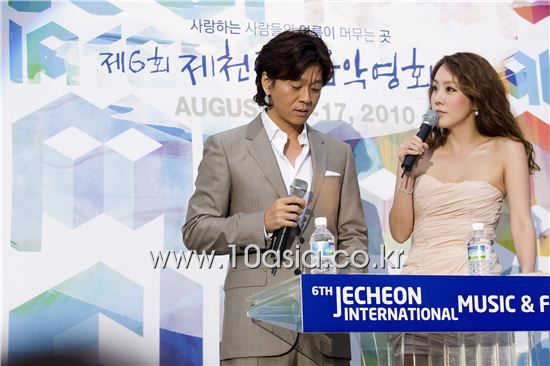 After having seen several nights of summer nights hot enough to melt the asphalt on the ground, rock artist Yoon Do-hyun and actress Kim Jung-eun, emcees of the opening ceremony of the 6th Jecheon International Music & Film Festival, brought a cool breeze with them. The wind, fresh and clear enough to cool down the heat from the daytime, did not stop blowing until the end of the opening ceremony. The event which took place ahead of 84 films from 26 countries meeting the audience, was a miniature version of this year's JIMFF.

While the performance by gayageums, or Korean zithers, hit a high on both music and film simultaneously with renditions of music from movies "Bunjee Jumping of Their Own" and "Mamma Mia!", the band performance by 1st generation Korean jazz artists, the main characters to film "Bravo! Jazz Life" to be screened at the fest, was a rare sight which can only be seen at the JIMFF. The jamming by the musicians who still have fun on stage even if their "teeth are no longer fully intact" and their fellow musicians have passed away, was not plainly a performance but rather a walk through their history.

It was past 10 p.m. by the time the ending credits rolled up for opening film "The Concert". But that was when the temperature around Cheongpung Lake started to rise -- because of band Comeback Madonna. The cast of new SBS TV series "I Am Legend", including Kim Jung-eun, Hong Ji-min, Hyun Jyu-ni, Jang Shin-young and Lee Joon-hyuk, gave back hugs and took photographs with the audience who had stuck around into the late night, as well as putting on a show worthy of the long time they spent rehearsing for it.

Then, the brilliant lights turned off and the stage closed its curtains. But the festival is just getting started. If you have yet to go on your summer vacation, do not hesitate. Jecheon is not as far as you think and the summer is short.