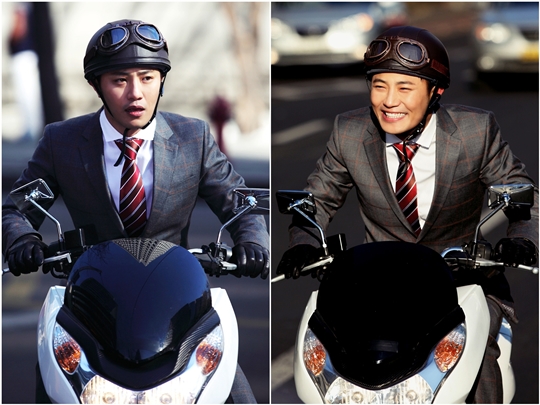 Jin Goo transformed into the genius art director Lee Tae-baek in the KBS 2TV drama "Ad Genius Lee Tae-baek" despite the bias towards him.

Jin Goo's role of Lee Tae-baek lives a tough life without any specifications, money or back up but has the strong mentality to break down those walls and walk through them.

The still cut revealed above is from the first episode. Lee Tae-baek is happy and smiling energetically on his way back from an interview.

Putting on the mask of a happy-go-lucky young man in his twenties, Jin Goo has been possessed as Lee Tae-baek and many are curious to see how he puts on this character in the future.

Unlike most of his serious and charismatic images so far known in movies and dramas, serious Jin Goo is nowhere to be seen but there is just a bouncy young man riding on a scooter.

Meanwhile, "Ad Genius Lee Tae-baek" is expected to deliver hops and dreams to those young generations who live a tough life. To be aired on the 4th of February after "School 2013".

"Jin Goo, where's the tough guy?"
by HanCinema is licensed under a Creative Commons Attribution-Share Alike 3.0 Unported License.
Based on a work from this source