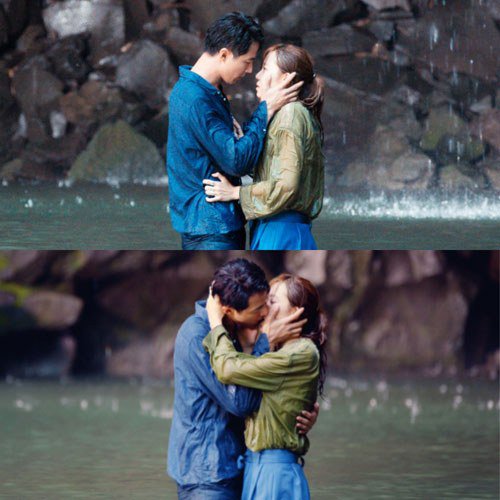 The two of them who are used to bickering all the time are finally showing some true feelings.

They are soaking wet and looking at each other seriously but romantically.

Hae-soo is embracing Jae-yeol's face as she's kissing him so it seems like she's feelings different towards him than the last time they kissed.

The scene was taken in Pocheon on the 1st. Because it was such an emotional scene where they have to show how they feel for each other, Noh Hee-kyeong, the writer, was also at the scene to support them.

Apparently, Jo In-sung and Gong Hyo-jin worked hard to make their emotions gather up before the camera started rolling.

Jo In-sung looked at Gong Hyo-jin in the most sincerest of ways and even she managed to show the complicated feelings inside her in the short time.

The production claims, "We can say that this is their first actual kiss. They have been through a lot to get here and maybe that's what makes this scene so romantic".

Meanwhile, "It's Okay, That's Love" episode five can be seen on the 6th at 10PM.

"Jo In-sung and Gong Hyo-jin's wet kiss in "It's Okay, That's Love""
by HanCinema is licensed under a Creative Commons Attribution-Share Alike 3.0 Unported License.
Based on a work from this source