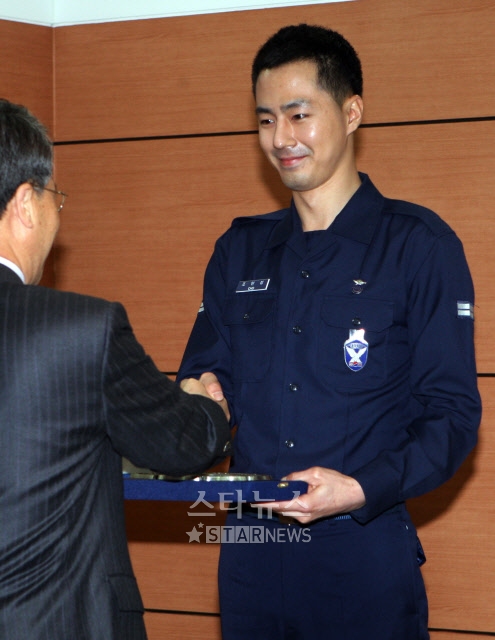 Actor Jo In-sung, who is serving as an air force sergeant received an appreciation plaque from the Military Administration.

The Administration held The 13th Three Government Office Academy in the Daejeon government office on the 27th at 2:30 PM. Administration promotions ambassador Jo In-sung and the military orchestra was invited and the event.

Before the event was held, Jo In-sung received an appreciation plaque from the director of the government office Kim Young-hoo. He received this plaque for contribution of expansion of active military service performance.

Jo In-sung expressed his feelings saying, "What I have experienced as the Administration Promotion Ambassador will create a more affluent life for me as an actor".

Director Kim Young-hee also encouraged him by saying, "He will do better and receive more love through his confident and exemplary service in the army".

Meanwhile, Jo In-sung was admitted into service April of 2009 and is expected to be discharged this coming May 4th.

"Jo In-sung, Appreciation Plaque... "Promotions ambassador, precious memory""
by HanCinema is licensed under a Creative Commons Attribution-Share Alike 3.0 Unported License.
Based on a work from this source