Jo In-sung, gets award certificate from the chief of staff 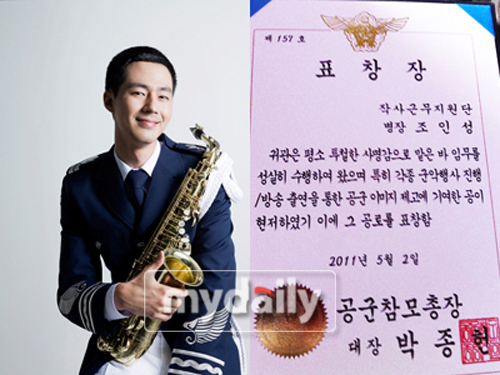 Actor Jo In-sung received an award certicicae from the chief of staff with his discharge coming up on the 4th.

According to his management Sidus HQ, his duty to the army all the while earned him the certificate and this the first time an award was presented by the chief of staff personally to a soldier.

Jo In-sung received the award certificate as he has fulfilled his duties as a soldier with responsibility and has taken part in various military band events and made TV appearances, adding a boost to air force image.

Currently serving in the military band, Jo In-sung was promotion ambassador for the Military Manpower Administration and has been active in military events big and small.

Meanwhile, Jo In-sung will be discharged on the 4th at 10 AM from Ohsan.

Also, his surprise appearance in the KBS 1TV "Challenge Golden Bell" will be broadcasted this 8th.

"Jo In-sung, gets award certificate from the chief of staff"
by HanCinema is licensed under a Creative Commons Attribution-Share Alike 3.0 Unported License.
Based on a work from this source