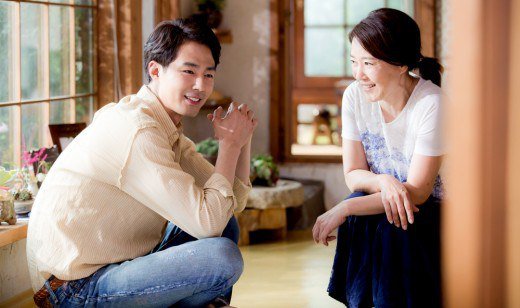 Jo In-sung now has the hearts of mothers all around the country.

Stills of Jo In-sung and "Mother" Cha Hwa-yeon from the SBS drama "It's Okay, That's Love" were released on the 11th. They take on the roles of Jang Jae-yeol and Cha Ok-ja.

In the pictures, the two of them are making eye contact and smiling at each other. Jo In-sung makes his mom proud and says the nicest things to her in the drama, making him the 'wannabe son'.

Jang Jae-yeol calls his mother Ok-ja and asks about her well-being, plays her music on the phone and even becomes cute and asks if she likes him or his brother more. He agrees with everything she says and even kisses her on the forehead. He frequently tells her he loves her. The scene where he tells his mother, "Have I ever told you I love you?" is enough to have all the mothers in the world in his hands.

"It's Okay, That's Love" sources say Jo In-sung and Cha Hwa-yeon are always taking care of each other and she treats him like a son.

Meanwhile, "It's Okay, That's Love" can be seen every Wednesday and Thursday at 10PM.

"Jo In-sung, so romantic"
by HanCinema is licensed under a Creative Commons Attribution-Share Alike 3.0 Unported License.
Based on a work from this source