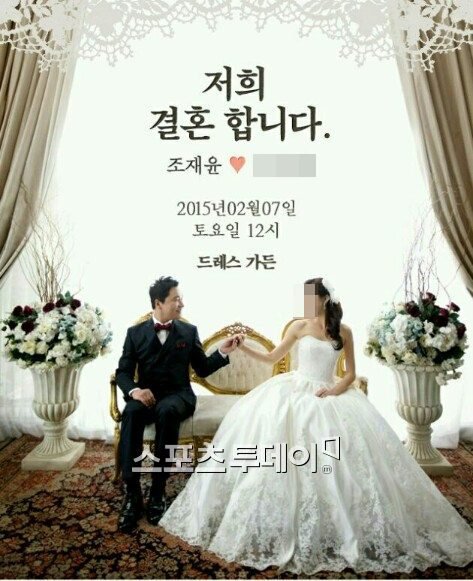 Sports Today obtained the wedding invitation which states the date and location of the wedding.

The words "We Are Getting Married" and the picture of the bride and groom looks romantic.

Jo Jae-yun's wedding is being held at Dress Garden in Chungdamdong, Seoul at noon. A brief photo wall will be held for about 30 minutes from 10:30AM before the wedding.

The officiant for the wedding is Yoo Jeong-hoon, chairman of Showbox, hosted by Cul-two. Bang Minah from Girl's Day and other FNC artists will serenade the couple on their special day.

The bride to be is a shopping host 9 years younger than him. They met through a friend and their friendship developed into romance after some time.

Meanwhile, Jo Jae-yun graduated the Seoul University Department of Theater and debuted in 2003. He hit the jackpot in the 2014 drama "Empress Qi".

"Jo Jae-yun's wedding photo invitation"
by HanCinema is licensed under a Creative Commons Attribution-Share Alike 3.0 Unported License.
Based on a work from this source