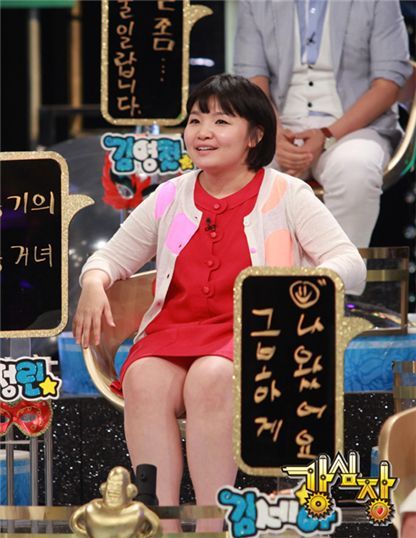 Comedienne Jo Jung-rin has revealed that she almost got kicked out of her agency for helping Korean singer Lee Seung-gi back in the days.

During a guest appearance on SBS variety show "Steel Heart" on Tuesday, which Lee co-hosts with top emcee Kang Ho-dong, the funnywoman shared an anecdote from when she and Lee were both with the same agency and he ended up creating trouble in return for her favors.

"Contrary to what everyone thinks, Lee Seung-gi doesn't always live the good-boy life", the comedienne started off by saying "I almost got kicked out of the agency because of him".

"Seung-gi was famous for being a hard-working person even during his trainee days, but one day the president of the agency said that he was going to drop by the reading room Lee goes to", said Jo on the show. "I wasn't worried because he is such a good and hard-working boy but I sent him a text message that the president might be dropping by later, just in case".

"A little later, he sent me a reply that said, 'Thank you. Seriously, I almost got in big trouble'," she added.

Jo explained that the two kept on exchanging such text messages in similar circumstances until one day Lee Seung-gi ended up, by mistake, texting the agency head: "Thank you every time, sis.. I am heading over to the reading room right now".

When the president arrived at the reading room, he opened the car door and shouted to unsuspecting Lee, "You, get in" and confiscated his mobile phone.

Known for her special talent in imitating voices, she was named best newcomer in variety show category at 2003 MBC year-end entertainment awards.

"Jo Jung-rin says Lee Seung-gi stirred trouble with agency"
by HanCinema is licensed under a Creative Commons Attribution-Share Alike 3.0 Unported License.
Based on a work from this source