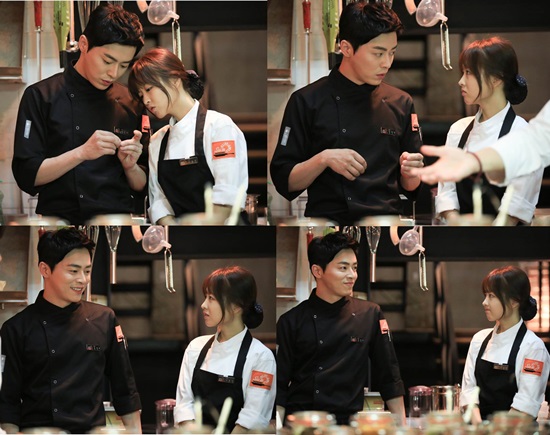 On June 18th, 'Oh My Ghostess' revealed the still images from the set, full of the evident synergy effect with the pair Park Bo-young (Na Bong-seon) and Jo Jung-suk (Kang Seon-woo).

In the revealed photos, the two stars are having a friendly conversation exchanging the sweet eye contact in a kitchen of a restaurant. It is easy to tell how friendly and heartwarming the vibe must be on the set just by looking at the smiling faces of the two.

Producer Yoo Je-won said, "The chemistry and the interaction between the two are really great even when we have just started filming. Park Bo-young's innocent yet saucy appeal and Jo Jung-suk's sexy charisma are successfully presented through their excellent acting performance. It creates the synergy effect in the chemistry of this pair. Please look out for their chemistry as a couple between Park Bo-young and Jo Jung-suk".

'Oh My Ghostess' is a romance drama between Na Bong-seong, a sous chef of a timid personally, possessed by a seductress ghost, and Kang Seon-woo, a narcissistic star chef.

Park Bo-young plays Na Bong-seon, who does not have any friends because of her timid personality and is always picked on while working for the restaurant as a sous chef, because she is not good at anything specifically.

Jo Jung-suk plays the star chef who has become popular because of his outstanding cooking skills and handsome appearance. Park Bo-young's character has a secret crush on him.

"Jo Jung-suk and Park Bo-young in 'Oh My Ghostess' exchange sweet eye contact"
by HanCinema is licensed under a Creative Commons Attribution-Share Alike 3.0 Unported License.
Based on a work from this source