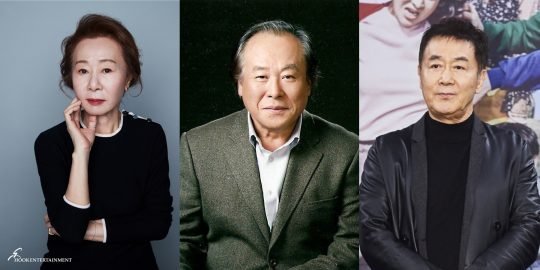 "Never Twice" is a story about recovering from past failures and old wounds. It follows those who stay at Nakwon Inn in the middle of Seoul. Actress Youn Yuh-jung confirmed a role in the drama, making it her first drama in 6 years.

Joo Hyun plays Choi Geo-bok, a man who goes to Nakwon Inn to meet Bok Mak-rye (Youn Yuh-jung) for the first time in 50 years. He's a mysterious character, as no one knows where he's from, what he does, or who his family is. Geo-bok unpacks in room 1, but Mak-rye is very mean to him. However, he is a romanticist who is happy with what he has.

Han Jin-hee plays Na Wang-sam, the chairman and founder of Guseong Hotel; a hotel that sits right across Nakwon Inn, which is old and run-down. He always thinks he's right and just, blinded by his own success. He thinks Nakwon Inn is a nuisance, as he's had a bad encounter with Mak-rye back in the day, and the two are always at each others' throat.

"Never Twice" is written by Koo Hyeon-sook ("The Gentlemen of Wolgyesu Tailor Shop", "The Legendary Witch"), directed by Choi Won-seok ("Make a Wish", "Oh Ja-ryeong is Coming") and it begins in November.

"Joo Hyun and Han Jin-hee Join Youn Yuh-jung in "Never Twice" "
by HanCinema is licensed under a Creative Commons Attribution-Share Alike 3.0 Unported License.
Based on a work from this source