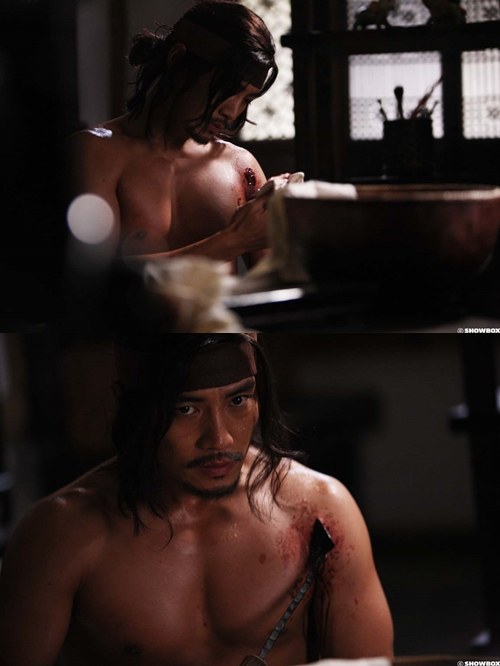 Joo Sang-wook is Ha Ji-won's secret man in the movie "The Huntresses".

"The Huntresses" is about a trio of hunters handling a case that the Chosun's fate depended on.

"The Huntresses" revealed a half naked still cut of Joo Sang-wook, a secret warrior who interferes with anything The Huntresses do.

His hair is long and there's a scar across his face. His face is expressionless and cold and he dominates his opponents with his eyes. He shares a crucial secret with Jin-ok (Ha Ji-won).

The still shows him treating wounds on his shoulder in a dark room. As if he can't feel pain, he remains still as he puts something hot on the wound.

Joo Sang-wook is known for his love for sports and apparently, the action team left it all up to him.

If Joo Sang-wook was called 'Angry Sang-wook' last year in the drama "Good Doctor", this time, he will become the mysterious warrior who even makes The Huntresses freeze in front of him.

Meanwhile, this cheerful, comical action movie will be released on the 29th this month.

"Joo Sang-wook topless in still cut"
by HanCinema is licensed under a Creative Commons Attribution-Share Alike 3.0 Unported License.
Based on a work from this source