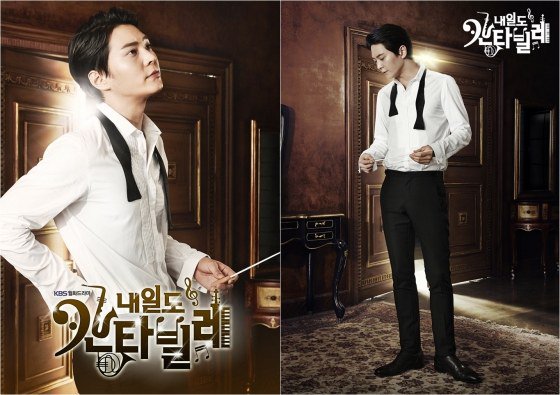 Joo Won is wearing a white shirt and black pants in the image revealed by the production.

The way Joo Won is holding the baton looks like he just jumped out of the cartoon. He was posing exactly like the character Cha Yoo-jin during the entire photo shoot.

Unlike the upright and kind image he's been portraying in his past work, this time around Joo Won appears to be more manly and lovable than ever before.

Cha Yoo-jin is the Korean version of the Japanese original character Chiaki in 2006. News of the original being remade into Korean drew in a lot of attention from its manias and fans.

The production claims, "Joo Won was the first person we thought of for this role. No one else could do it. Joo Won's actions, speech and behavior reflected exactly what we expected of him, which surprised us all".

"We have high expectations of Joo Won's performance of Cha Yoo-jin. He is concentrating hard on making his own character. His commanding skills have also been great since he's been practicing before he was cast".

"Tomorrow's Cantabile" is the story of youths passionately following their dreams for classic music. It will be first broadcast on October 13.

"Joo Won's character image revealed in upcoming KBS drama "Tomorrow's Cantabile""
by HanCinema is licensed under a Creative Commons Attribution-Share Alike 3.0 Unported License.
Based on a work from this source